After securing two road wins against the Chicago Bulls in the first round of the NBA Playoffs, the Washington Wizards are preparing to take on the Bulls at home in Game 3 tonight.

The Wizards won Game 2 101-99 in overtime. Former Gator Bradley Beal was the game’s high scorer in the win with 26 points. D.J. Augustin was the leading scorer for the Bulls, recording 25 points on 10 of-22 shooting, improving from a 3 of 15 performance in Game 1.

The Wizards were 22-19 at home this season, worst among the 16 teams that made the playoffs.The Bulls won the last meeting in Washington 96-78, however the Wizards were without big man Nene in the game. The Bulls have struggled containing him in their last two contests, as he recorded 24 points in Game 1 and 17 in Game 2.

Wizards head coach Randy Wittman says his team will have to play harder at home to be successful.

“We’re going have to play harder than we have in first two games. I want the team to be greedy and have an understanding of why we won the first two games. It’s gonna be tough as the series moves on no matter what hapens in next two games; each game will be harder and harder. We have a lot of guys that haven’t experienced that and I want them to have that understanding that we’ve won two games, why did we win them and how did we go about it. Now we have to do it even better and even harder if we are going to continue to move forward,” Wittman said.

The game tips off tonight at 8 pm in the Verizon Center and will be shown on ESPN.

To hear audio from Coach Wittman, click the link below.

Previous Miami is Heating up in NBA Playoffs, Ready to Take on Bobcats in Game 3
Next NBA Playoff Update 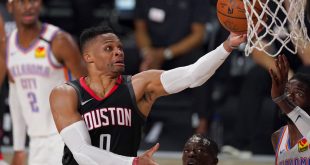 Russell Westbrook is now a member of the Washington Wizards. The point guard, who played …