The USC Tournament was nothing but “California Love” for the 10th ranked Gator volleyball team. Coming off consecutive losses to top-10 opponents (FSU and Texas), the Gators were “California Dreamin'” for a bounce back.

After sweeping 13th ranked San Diego Thursday night, the Gators turned their attention to the host team, the sixth ranked Trojans. The Orange and Blue made quick work of the home team, taking them in three sets (25-23, 25-23, 25-22). The victory was particularly special as Florida head coach Mary Wise became the only active female Division I head coach to eclipse 800 career victories.

Wise was quick to state that the rough schedule was a big reason for the team’s bounce back.

“We won this match because of the improvements this team made from a week ago,” Wise said. “And the schedule presented itself an opportunity for us to get better to be able to play this match. The grit that this group showed at the end of all three sets says a whole lot about where we are right now.”

After a tightly contested first-set win Friday that featured nine ties and two lead changes, the Orange and Blue (5-2) worked their way back from a 21-18 deficit in the second frame, outscoring the Trojans 7-2 down the final stretch for a 25-23 set-two victory to enter the break ahead 2-0. The Gators went to middles Rhamat Alhassan and Simone Antwi four times, while freshman outside hitter Carli Snyder and sophomore right side Alex Holston each struck to complement a Nikki O’Rourke service ace, her first of the campaign.

In the third set, which included 13 ties and six lead changes, UF put on a gutsy performance after the Gators called time out down, 22-20. Florida scored the next five points thanks to two Antwi slams, Snyder and Holston kills, while capitalizing on a USC attack error.

While Alhassan (11), Antwi (12) and Holston (13) posted double-digit kill and point outputs with the help of junior setter Mackenzie Dagostino’s 40 assists, Florida’s defense was on point against the Trojans with 10 blocks to USC’s four, including seven from Alhassan, while four Gators had seven or more digs in a total team effort paced by senior Holly Pole’s 16.

Alhassan and Holston were named to the USC Classic All-Tournament Team following a stellar two days of play at the Galen Center.

The Gators now have a week off before they are back on the hardwood to host the Campus USA Credit Union Invite September 19-21 when UF hosts Marquette and UCF in the Stephen C. O’Connell Center. Florida’s first match of the tournament will be against Marquette on Friday night at 7 p.m. You can catch that game on ESPN 850 WRUF.

Wise talks about how the team has rebounded since their loss to No. 3 Texas 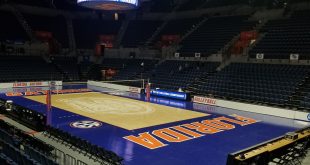