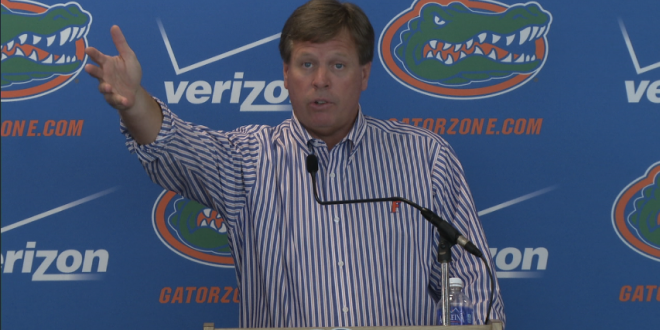 Jim McElwain Reflects on Kentucky and Looks Toward Tennessee

Florida football defeated Kentucky for the 29th consecutive game this past Saturday 14-9. As always, the defense was key in the game as the defensive line had six sacks on the night. Vernon Hargreaves III began the game with an interception, but it would be Quincy Wilson’s pick six in the fourth quarter that would win the game for the Gators.

Florida coach Jim McElwain on Monday discussed the team’s latest win and how they are preparing for the Tennessee Volunteers this coming Saturday.  Florida’s offense has progressed in terms of efficiency (ranked 88th in 2014 season; ranked 67th as of now), but McElwain says there is still room for improvement.

“Offensively, didn’t obviously do what we need to do in the red area to capitalize on field position.  The one good thing is we flipped the field position; we forced some long fields. We’ve gotta do that to win games as we get better on that side of the ball.”

McElwain appointed Will Grier to the starting quarterback position during the Kentucky game in which Treon Harris saw no playing time.  McElwain says that area still needs work.

“There we some opportunities…maybe should have put him (Treon Harris) in.  That’s the way it goes; we kind of get a feel for it.  That’s what we talked about and yet [there are] some things we have got to work on in that position.”

Field goal kicking was the biggest concern to McElwain during the game in which kicker Austin Hardin had his only field goal attempt blocked.

“The missed field goals are something that are starting to become a concern…low trajectory; it’s not there’s a block issue in there…we need to get better at it.”

Overall, McElwain says he was proud of the Gators for their victory over the Wildcats.

“Very happy about the win and yet, as soon as it was over, it was time to tear that one off, learn from it, and move forward.”

The Gator football team has defeated this Saturday’s opponent, Tennessee, in 10 consecutive games.  McElwain says that one of the Vols stronger suits is in their offense and the Gators must able to capitalize defensively on the field.

“This is a team, offensively, the quarterback gets this thing going, he takes care of the football, he makes great decisions…we’ve gotta be really good tacklers this week and hopefully not give them a bunch of gaping holes ’cause they can hurt you and they can finish.”

Tennessee head coach Butch Jones has coached wide receivers at both West Virginia and Central Michigan and McElwain says this experience is what makes the Vols offense fundamentally sound.

“Butch (Jones) has a lot of receiver background as a coach and you can tell the way those guys play fundamentally and get after you. They’re not turning the ball over and I think that goes back to the credit of what they’re doing.”

According to McElwain, the key to stopping this offense lies in the Gator defense being able to fill the holes.

“Our [defensive line] has got to maintain gap control; that’s got to be something big. It hurt us a little bit in this last game…we need to continue to get better at that to stop these guys in run game.”

McElwain says the Vols have just as much fire power on defense as they do offense.

McElwain believes this will be the biggest game yet for the Gators.

“You put yourself in a position by winning ball games to play in bigger ball games. And yet this is the biggest game of the season because it’s the next game and the game will come on Saturday…where we win the ball game is things we’ve done in preparation all the way back from spring ball.”

Kick off will be at 3:30 PM as the Florida Gators host the Tennessee Volunteers.  Live coverage starts at 11:30 AM here on ESPN Gainesville 95.3 FM.

McElwain says he is happy about the win