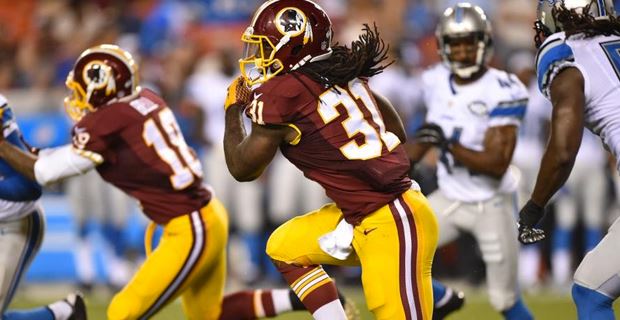 Former Gator running back Matt Jones is in his rookie season with the Washington Redskins after being selected in the third round of last year’s NFL Draft.   Jones says he’s had a smooth transition from college to the NFL.

“Probably just adjusting to the speed of the game, it wasn’t really so fast coming from the SEC, because it’s fast in the SEC but it was a little faster. Once I got into it during camp it kind of slowed down for me and it has been a great transition from there,” Jones said.

The rookie running back has played in three games and has rushed for 189 yards in 36 attempts with two touch downs this season. Jones says Redskins head coach Jay Gruden is a great coach to be around.

“Jay Gruden is more of a people’s person, he fits in. He’s not just a coach; he’s a guy you can talk to on and off the field. He’s a funny guy, he has a great sense of humor. He’s a great coach to be around.”

While the Redskins are 1-2 this season, Jones’ former team, the Florida Gators, are 5-0. He says it feels great to see the Gators doing so well.

“Oh man, that feels great to see my boys 4-0; (at the time of the interview) they definitely have a great win like they did last week.”(against Tennessee)

When Jones joined the Redskins, his first move was to earn respect from his new teammates. He says if you make plays then you can earn respect.

“It was pretty smooth, when I first got here, you know you have to earn respect. When you make plays you gain respect without saying anything. And when I came in I started to compete with the guys, no rookie stuff.”

The Washington Redskins and Matt Jones will host the Philadelphia Eagles Sunday at 1:00 pm.

Matt Jones talks about his transition

Matt Jones talks about Gators being 4-0