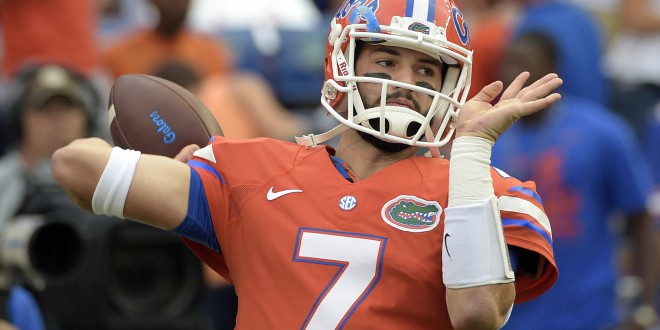 FILE - In this Oct. 3, 2015, file photo, Florida quarterback Will Grier warms up before an NCAA college football game against Mississippi in Gainesville, Fla. A person familiar with the situation says Grier has been suspended indefinitely for violating the NCAA's policy on banned drugs. The person spoke to The Associated Press on condition of anonymity because the school has not announced the decision. Grier is considering an appeal. (AP Photo/Phelan M. Ebenhack, File)

Gator QB Will Grier Suspended for One Year

Red-shirt freshman quarterback Will Grier has been suspended for the remainder of the 2015 season for NCAA rules violation. Grier took an over the counter supplement that contained a substance that is on the NCAA banned substance list. The athletic department and Coach McElwain became aware of the failed test Sunday afternoon. Coach McElwain says that the university will appeal the decision.

Grier has started five straight games for the Gators and has thrown for 1,204 yards and 10 touchdowns, with a completion rate of 65.8%.

Sophomore quarterback Treon Harris will start for the #8 Gators when they play #6 LSU Saturday evening in Baton Rouge. Harris started the first game of the season for the Gators and played in three other games. He has thrown for 269 yards and two touchdowns as well as rushing for 63 yards.

Florida Gators head coach Jim McElwain met with the media this afternoon and confirmed the NCAA suspension of quarterback Will Grier. The NCAA suspension for banned substances is “25% of the players eligibility” which means Grier will be out for a full calendar year, pending an appeal.

Multiple reports say that Grier tested positive for the supplement Ligandrol, a banned performance-enhancer, but the University Athletic Association refutes that.

Being told through UF that the substance is not Ligandrol. But won't be disclosed without Grier's consent.

The UAA takes multiple precautions regarding drug violations including a full educational program for each athletic team.

While Grier is on suspension, he will be allowed to practice with the team, but he will not be allowed to travel for road games. McElwain was quick to say that the university will be appealing this suspension and that they stand behind Grier.

Grier also met with the media for a few moments to express his regret for making this mistake.

"I really hope that people can learn from my mistake…I'm really sorry to everyone." -Grier

When McElwain was asked how the team reacted to the news, he said it was very emotional moment.

"They hugged him. They care about him. And they appreciated his honesty." -McElwain on team reaction to Grier #Gators

Without Grier the Gators will turn to sophomore quarterback Treon Harris versus LSU. McElwain expects Harris to play well.

"I felt like we had 2 really good QBs. This is not an excuse, things happen. We're going to have a great week of practice." McElwain #Gators

WRUF.com will continue to follow this story as it develops.

22 years old from Pensacola, FL. Telecommunications major at the University of Florida with a focus on Sports News, also pursuing a minor in Communication Studies.
@yancey_dewayne
Previous Florida Soccer Defeats LSU 2-1 on Sunday
Next NLDS Preview

Recruiting is a year long sport. With that being said, Gators Head Coach Dan Mullen …