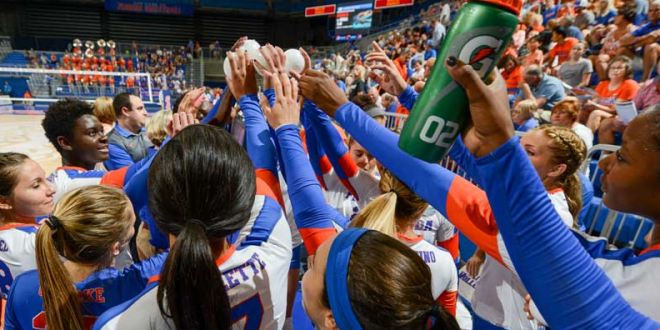 After taking down LSU in three straight, No. 4 Florida (21-5) will meet with their final SEC opponent of the regular season; the 25th ranked Texas A&M Aggies.  The Gators swept the Aggies in three in early October during their first matchup and will look for another as Florida has swept the last eleven out of its 13 opponents.  Under head coach Mary Wise, the Gators are 9-0 against the Aggies.

Last matchup with Texas A&M featured four ties and two lead changes so the Gators can expect to have a tough game on Sunday.  Four Gators hit above .400 during the first matchup in which Carli Snyder hit her season-best of .545.  The Aggies are right behind Florida in the hitting percentage rankings at .273 showing that the Gators will need to be solid in the back row in order to stay on top Sunday afternoon.

Florida will meet with Texas A&M in College Station for it’s SEC finale Sundat at 2:00 PM.  Live coverage will begin at 1:50 PM on ESPN Gainesville 95.3 FM.