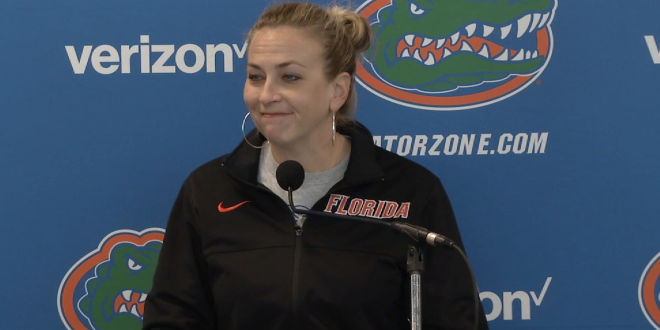 The UF women’s basketball team will tip-off against Savannah State tonight in the O’Dome at 7PM.

On Saturday, Florida faced Kennesaw State and domination in the paint helped the Gators roll past the Owls. Shortly after tip-off, the Gators fell behind the Owls in four quick points, but the Gators came chomping back and rattled off 12-2 run. Sophomore guard, Dyandria Anderson scored six of those early points which gave the Gators a 18-12 lead at the 3:17 mark of the opening frame.

The Gators used their size and quickness to slam down easy baskets and from that point forward, Florida dominated the entire game. Junior guard, Ronni Williams collected a game-high of 14 points and it was noted that she was shooting 7-of-14. Ten rebounds were earned by Williams and this was her seventh career double-double.

Savannah State is entering Gainesville after already having a taste of playing a team in the Southeastern Conference. The Tigers are coming off of a 62-40 home loss to Auburn. Savannah State is lead by head coach Cedric Baker and his Tigers also wear the colors orange and blue.

Last season, the Tigers stunned the Gators 68-58, in Savannah. Florida’s head coach, Amanda Butler made it known that the Tigers will be a tough team to overcome, but the Gators have shown a great deal of aggressiveness this season. Freshman guard, Eleanna Christinaki and junior guard, Simone Westbrook have been credited for electrifying the team and for having “ninja hands.”

Approximately 14 hours after the final horn sounds against Savannah State, the Gators will hit the road traveling 1,481 miles to Boulder, Colorado to compete in the 29th Omni Hotels Classic hosted by the University of Colorado.

A senior at the University of Florida reporting on Gator sports, local Gainesville and surrounding area sports, and telling the stories of local athletes. Born and raised in Gainesville, Florida with a passion for telling people's stories and having fun doing it.
@SportsDarwinism
Previous The Magic fall against the Cavs, while the Heat pummel the Knicks
Next Panthers Fall to Kings, 3-1