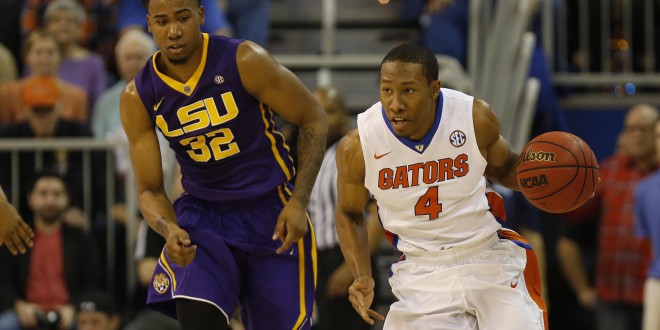 For just the eighth time in program history, the Florida Gators (10-5) and the Texas A&M Aggies (13-2) will meet on the hardwood. Despite coming off of a big SEC win this past Saturday over Ben Simmons and the LSU Tigers, the Gators aren’t the only ones coming into the game with momentum. The Aggie have been red hot to start the season, and have won their past seven games, including big wins over Baylor, Kansas State, and most recently, Tennessee.

While the Gators have been good at home, with an 8-2 record at the O’Connell Center this season, Florida won’t have the luxury of playing in front of their fans and the Rowdy Reptiles. Tonight’s game will take place at the ever hostile Reed Arena, where the Aggies have gone 9-0 this year, and 40-7 in the last three seasons.

Chris Chiozza, KeVaughn Allen, Kasey Hill and DeVon Walker will have their hands full with the Aggies backcourt tonight. Senior guards Jalen Jones, Danuel House, Alex Caruso and Anthony Collins lead Texas A&M’s offense, and all contribute something different on the court. House leads the team in scoring with 16.8 points per game, while also dominating the boards with a team leading 6.6 rebounds per game. House is the team’s second leading scorer with 15.7 points per game, and has always been a deep threat for the Aggies, shooting 34.2% from downtown in his career with Texas A&M. In their last game against Tennessee, House and Jones combined for 50 of the team’s 92 points. Florida Head Coach Mike White discussed the team’s terrific starting backcourt.

Caruso is the team’s best perimeter defender, and currently leads the NCAA (Division I) in steals after racking up five take-aways against the Volunteers last contest. Caruso’s efficiency on the floor has led to a 15:4 assist-to-turnover ratio in his last two games. Finally, Collins is the team’s floor general, posting a team leading 5.1 assists per game this season and an SEC best 7:1 assist-to-turnover ratio in in-conference matchups. Collins is currently the NCAA’s active leader in dimes with 463 career assists.

If the Gators want to win this game, they’ll have to do what they’ve done well all season, rebound and defend strongly. Florida ranks 17th in the nation and 2nd in the SEC with 42.1 rebounds per game, and rank 22nd in the NCAA in total defense, giving up an average of 63.4 points per game. Coach Mike White talked about how his team would need another great defensive stand tonight like they had against Michigan State. Along with defense and rebounding, center John Egbunu must stay out of foul trouble to help dominate a smaller Aggies team in the interior, and the Gators must get smarter with their shot selection. As a team, Florida has shot 41.4% from the floor this season, putting them at 289th in the nation. From beyond the arc, the team has been subpar this season as well, shooting 28.3%, ranking 336th out of 346 teams in the NCAA. Coach White, despite the numbers, says he’s seen some encouraging signs despite the team’s shooting woes.

TV and Radio Information: The game can be seen at 7 P.M. ET on the SEC Network. Matt Stewart and John Sundvold will be on the call, with Laura Rutledge working the sidelines. You can hear the game live on ESPN Gainesville 95.3.