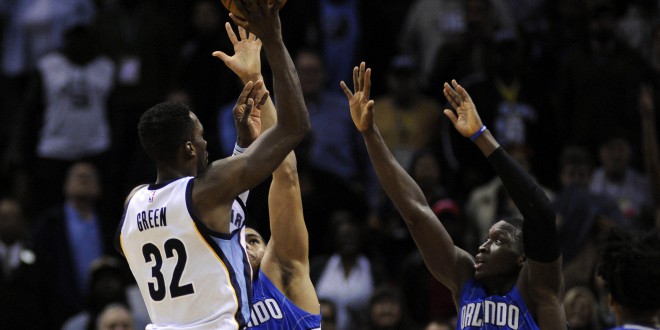 The Memphis Grizzlies Shut Down The Magic Show In Overtime, 108-102

Early on, the Grizzlies’ offense looked to be in hibernation, so they looked to Jeff Green to give them a chance to fight back against the Magic. Green’s season-high 30 points kept them in contention, but it was the Grizzlie’s defense that sealed the deal.

Orlando went on a 9-0 run late in the game and all the magic seemed to be working in their favor. Until a whirlwind of events happened.

Jeff Green capitalized off of a dominating dunk and then went coast-to-coast after stealing the ball away from Orlando. The score was in the Magic’s favor, 100-96. Green sped up the court, with 1.3 seconds left on the clock, he triggered one off from downtown. Green’s shot tied the game up at 100, at the end of regulation.

In overtime, Orlando’s Evan Fourier scored an easy inside basket to cut down on Memphis’ lead, 103-102. The Magic had desire and determination in their eyes, but little did they know, that would be the last opportunity to for them to score.

The Grizzlies’ defense shut down the magic show. Memphis caused Orlando to turn it over once, and blocked three shots which allowed the Magic to only shoot one for ten shot out of 10, in overtime.

Evan Fournier says the Grizzlies’ late momentum from forcing the overtime, carried over into overtime.

Orlando’s Tobias Harris, Nikola Vucevic, and Evan Fournier all racked up 16 points apiece, but it wasn’t enough to end their losing streak. The Magic have now lost six straight games.

Magic’s coach, Scott Skiles says he doesn’t understand why the team can’t get it together in game time.

After the late 108-102 loss to Memphis, Orlando is preparing to face the Milwaukee Bucks tonight, on the road.

A senior at the University of Florida reporting on Gator sports, local Gainesville and surrounding area sports, and telling the stories of local athletes. Born and raised in Gainesville, Florida with a passion for telling people's stories and having fun doing it.
@SportsDarwinism
Previous SEC PREVIEW: LSU Hosts Georgia In Men’s Hoops
Next Miami Heat leave Chicago with a Win