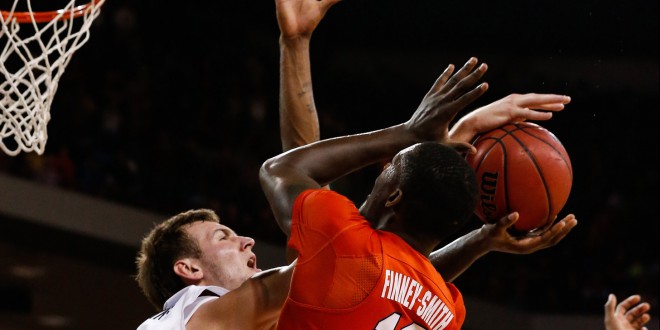 The Florida men’s basketball team overcame a 17 point first half deficit and played nip and tuck with South Carolina the rest of the way but in the end, the Gamecocks picked up a hard fought 73-69 home win on Saturday.

South Carolina forward Michael Carrera picked up his ninth double-double of the year, as he finished with 20 points on just 6-19 shooting. Carrera grabbed 15 boards though and was 4-8 from beyond the arc.  Guard Sindarius Thornwell was also instrumental in the Gamecocks’ victory, posting 17 points.

Despite being the second worst three-point shooting team in the SEC, the Gators shot 32 three-pointers, sinking only nine of them, good for 28 percent. Florida attempted 13 more shots from beyond the arc than South Carolina, who knocked down seven of their 19 looks.

While the Gators won the rebounding battle 42-39, South Carolina was able to offensively dominate the interior, scoring 38 points in the paint to the Gators’ 26, off of 17 offensive rebounds. And once again, Florida showed off their pass happy self, converting a solid 19 assists, despite turning the ball over 15 times.

Florida’s main advantage came in bench points, where the Gators’ reserves outscored South Carolina’s, 33-4. If you’re looking for another silver lining, Florida did shoot 80 percent from the free throw line, a significantly higher percentage than their 64.1 percent on the season.  But in the end, Florida went scoreless for the final 2:42 of overtime, a key factor in its defeat.

Mindaugus Kacinas gave the Gamecocks instant offense to start the game, hitting his first four shots in the first eight minutes, as South Carolina jumped out to a 15-10 lead with 11:53 left in the first half. Kacinas finished the first half with eight points on 4-7 shooting.

Florida in the first half decided once again to live and die by the three early, but found no success. After 10 minutes, the Gators were 1-9 from beyond the arc with only two points in the paint. The only Gator player to sink a three in that span was Devin Robinson, who finished the first half with 10 points and three rebounds.

The Gators dominance on the boards over the best rebounding team in the SEC helped propel their first half run. Florida out rebounded South Carolina, 22-17, grabbing 10 offensive rebounds in the first 20 minutes.

Devin Robinson and Dorian Finney-Smith combined for 19 points in the first half, going 7 of 11 from the floor, while grabbing 10 total rebounds as a pair. Florida ended the half at an efficient 40 percent from the floor to South Carolina’s 38 percent. Early turnovers contributed to the Gamecocks’ large lead, as Carolina turned Florida’s eight turnovers into 11 points. South Carolina also dominated the interior, outscoring Florida in the paint, 20-12.

Carrera and Kacinas combined for 16 of South Carolina’s 30 points in the first half, as they went 7 of 17 from the floor in the first frame.

Neither team could score with any consistency to start the second half, as Florida and South Carolina went a combined 5-22 to open the half. After eight minutes of play in the second half, the Gators led by one.

Following the stagnant play to start the second frame, Florida and South Carolina both picked up the slack, tying the game at 52 with 7:07 left in the game. The Gators were forced to go small during the run, as John Egbunu and Kevarrius Hayes had four and three fouls respectively early in the half.

With just under five minutes left, Chris Chiozza hit a floater to give the Gators a three-point lead. Chiozza didn’t fill the box score all that well, but still finished with an efficient 11 points, three rebounds and two assists.

The second half featured over 10 lead changes, with the final two minutes ending hectic as ever. With 30 seconds left the Gators found themselves down by one with possession. Dorian Finney-Smith drove hard to the rim and got fouled. At the charity stripe, “DoeDoe” knocked down one of two to tie the game up 64. While Florida would receive the ball with two seconds left after a jump ball tie up between Devin Robinson and Michael Carrera, the Gators couldn’t knock down a shot, sending the game to overtime.

A Chris Chiozza three-pointer gave the Gators a 69-68 lead with 2:42 left in OT. After that shot, the Gamecocks would go on a 4-0 run to take a three-point lead with 25 seconds left in overtime. South Carolina led at that point, 72-69.  The Gamecocks hit one more free throw to ice the game.

Florida is now 8-6 in league play and will next play at home Tuesday against Vanderbilt, a team the Gator lost to earlier in the year in Nashville.

Florida-South Carolina was 66th meeting between the schools- the first that went OT. 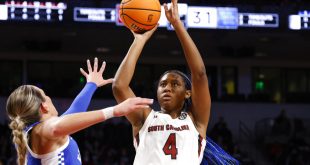