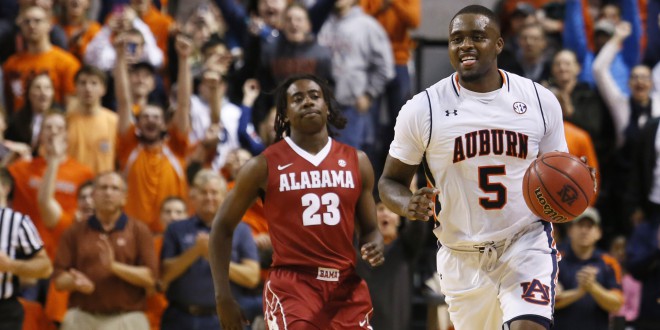 Hitting the home stretch of the regular season in college basketball and in state rivals Auburn and Alabama have a rematch in Tuscaloosa on Saturday.

The last time the two teams met up was at Auburn and the Tigers defeated the Crimson tide 83-77. This win was also coming off of the momentum gained from their win over Kentucky. Auburn hopes to feed off of another win in order to beat Alabama. Their last win was Wednesday at home against Georgia 84-81.

Auburn has struggled with some injuries – starting forward Tyler Harris is still recovering from a concussion from the Ole Miss Game. According to Coach Bruce Pearl it’s a day to day basis with it and they are still going over concussion protocol.

The Tigers are currently second to last in the SEC but are coming off of a crucial home win against Georgia 84-81. Jordon Granger, TJ Lang, Horace Spencer, T.J. Dunans and Bryce Brown held off the Bulldogs by also all adding career bests to their stat sheets.

Alabama is currently coming off of a two-game losing streak. The last game was a devastating loss against Kentucky that resulted in a 78-53 loss in Lexington. Before that, the Crimson Tide fell at home to Mississippi State 67-61.

Alabama needs this win because they are currently on the bubble, currently eighth in the SEC with a 7-8 record. With their recent losses, Alabama (16-11) is now at No. 43 in the RPI.  However Alabama has quite a few quality conference wins under their belt with Florida, Texas A&M, LSU, and South Carolina. A win against Auburn is crucial in keeping their hopes for an NCAA Tournament berth alive.

The Iron Bowl of hoops tips off at 4 p.m. on the SEC Network.