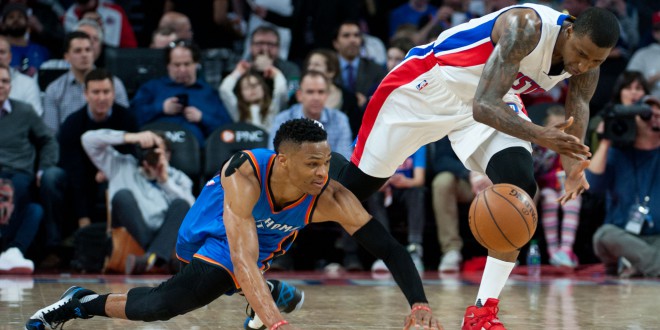 The Oklahoma City Thunder fell to the Detroit Pistons 88-82 at the Palace of Auburn Hills on Tuesday night, snapping their eight game winning streak.

Thunder head coach Billy Donovan decided to sit out starters Kevin Durant and Serge Ibaka, forcing Oklahoma City to rely heavily on point guard Russell Westbrook. While Westbrook scored 24 points and added in six assists and four rebounds, the five-time all star struggled with efficiency on the offensive side of the ball, missing a season-high 20 shot attempts and committing three turnovers.

The Thunder (52-23) as a whole shot 37.8 percent from the field and turned the ball over 19 times, leading them to score their lowest point total of the season at 82 points.

For the Pistons (40-35), Detroit was led by starting forwards Marcus Morris and Tobias Harris with 24 and 17 points, respectively. Center Andre Drummond pulled down a game-high 15 rebounds and tallied 13 points of his own. The victory vaulted the Pistons past the Indiana Pacers into seventh place in the Eastern Conference standings.

Detroit trailed Oklahoma City 48-46 at halftime, however went on a 20-2 run in the middle of the third quarter to put themselves up by 15 points. The Thunder regained some momentum late, cutting the deficit down to one point with 5:05 to go in the game, but that’s as close as Donovan and his team would get. Point guard Reggie Jackson would score eight points, including four clutch free throws, in the final minutes of the game to clinch the game for the Pistons.

Jackson would also be the center of a post-game conflict with his former team. Following a Steven Adams foul on Aron Baynes with one second to go in the game, Jackson boisterously celebrated in front of Oklahoma City’s bench, prancing up the court and waving his arms to pump up the crowd.

Following the game, Westbrook voiced his displeasure for Jackson’s actions.

Tuesday’s game for the Thunder was their first loss in Detroit since December 26, 2008. Despite their struggles on offense in the second half, Donovan says there was still a lot to be optimistic about.

Up next for Oklahoma City, the Thunder will head home to take on the Los Angeles Clippers on Thursday at 9:30 p.m. Oklahoma City is currently third in the Western Conference standings and have already clinched the Northwest Division.