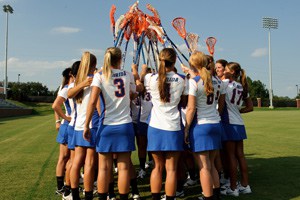 No. 1 Maryland Terrapins visit the No. 2 Florida Gators in Gainesville this Saturday, March 19, at noon.

The No.2 ranked Florida lacrosse team (10-1) plays host to Temple (8-2) in a Big East Conference showdown Saturday. The Gators are (1-0) in conference play after their 16-2 win over Vanderbilt last week. The Owls are opening up their Big East season against the Gators.

Senior Nicole Graziano has been the go-to playmaker down the stretch for the Gators. Graziano has scored 24 goals this season including five goals last weekend against Vanderbilt. Earlier in the week, the midfielder took in her fourth Big East Midfielder of the Week award.

The match is set for Saturday, April 2, at noon in Dizney Stadium.

Originally from Ocala, Florida. University of Florida Class of 2017. Avid FIFA player willing to beat anybody. Follow me on Twitter for everything you need to know!
@JoshLaSelva
Previous Gator Women’s Tennis Remain Atop the SEC with Win Over No. 15 LSU
Next MLB Closes in on Opening Day