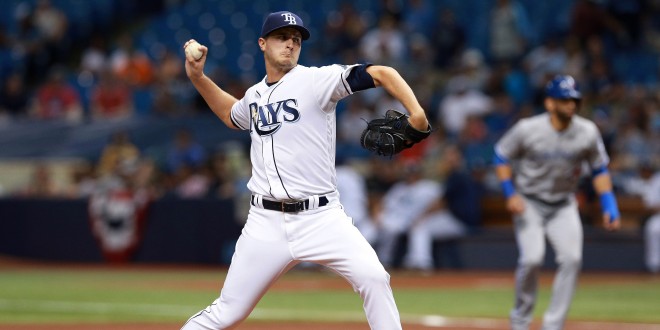 When second baseman Logan Forsythe’s throw skipped past first baseman Steve Pearce’s glove on an attempted double play, things seemed to be going south for the Rays. With the bases loaded, it seemed like Toronto had scored two runs to take a 4-3 lead in the ninth inning.

One review and a few minutes later, though, and the Rays had their first win of the season, 3-2.

Kevin Cash, the Rays manager, went to the umpires after the play, and asked them to review it to make sure there wasn’t any interference on the play. What he was talking about was the play at second base, where Toronto’s Jose Bautista appeared to reach his arm out to interfere with Forsythe’s throw. Not illegal in prior seasons, this is the first season in which there is a rule against this sort of interference, in what is being called the “slide rule.”

Walking off on a replay reversal like this? A first. #RaysUp

Blue Jays manager John Gibbons was disappointed that the game ended like that, calling the situation an “embarrassment”.

Cash, meanwhile, understood Toronto’s frustration, but was happy that his team won their first game, saying that the new replay system can lead to situations like these.

Lost among the controversy of the game ending play was the the strong pitching and timely home runs that put the Rays in position to win the game in the first place.

Starting Rays pitcher Jake Odorizzi put together a strong performance, going 5.2 innings, while only allowing one earned run and striking out 10 batters. Although he earned a “no decision” for his efforts, his work on the mound kept the Rays in a position where they could pull out the win. Cash praised Odorizzi, saying that Odorizzi’s ability to get out of the fourth inning jam with minimal run damage “helped us stay in the ballgame”.

The Rays strong pitching continued with their bullpen, as three relievers combined for no earned runs over 3.1 innings, with Alex Colome getting his first save of the season.

With such a strong pitching performance, Tampa Bay got all the runs they needed on two home runs.

Designated hitter Corey Dickerson started the scoring for the Rays with his solo home run in the fourth inning. His blast deep over the right field fence is his second home run so far this season, and cut the Blue Jays lead to 2-1.

Still down 2-1, it was Forsythe who gave the Rays the lead once and for all in the later stages of the game.

Forsythe stepped up to the plate in the eighth inning, and launched a two run homer the opposite way, this one also over the right field fence, giving the Rays the 3-2 advantage and what would go on to be the game winning runs.

No better spot for Logan's first homer of the season. #RaysUp

The Rays host the Blue Jays on Wednesday in the last game of their four game series, with Matt Moore on the mound for the Rays and J.A. Happ starting for the Blue Jays.