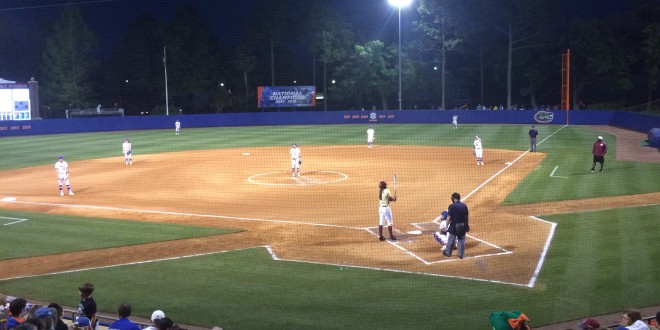 Gator Softball Game Against FSU Delayed, Will Resume in Tallahassee

With rain pouring down in the bottom of the ninth inning, the extra inning clash between the top-ranked Florida Gator softball team (38-3) and the eighth-ranked Florida State Seminoles (31-4) was suspended due to inclement weather. The game will resume in three weeks when the Gators face the Seminoles in Tallahassee on May 4.

Up to the point where the game was suspended, the Gators and the Seminoles were locked in a defensive battle. Through seven innings, the score was 0-0, and defensive plays were the top highlights, including a double play from Justine McLean in the top of the first.

B1: Gourley worked out of that jam in the 1st inning thanks to THIS sweet double play by @justinemcleannn!! pic.twitter.com/jMYsQajipK

With the score at 0-0, the game headed to extra innings where the scoring drought continued through the eighth inning. In the bottom of the ninth with runners on second and third and Aubree Munro at bat with just one out, the Gators looked to be in good position to score, but the game was then called due to the weather.

Both teams finished the game with three hits each. Delanie Gourley, Kelly Barnhill and Aleshia Ocasio all saw action at pitcher for the Gators and they combined to strike out 14 FSU batters.

The Gators will be back in action this weekend in Gainesville when they take on Louisiana at Lafayette in a three-game series.

Junior telecommunication student at the University of Florida. Passionate about all things related to sports.
@@EllenBazley
Previous Gator Lacrosse tops Marquette 15-5
Next Tampa Bay Lightning Take Game One in First Round of Stanley Cup Playoffs 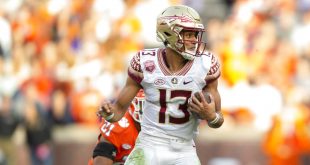