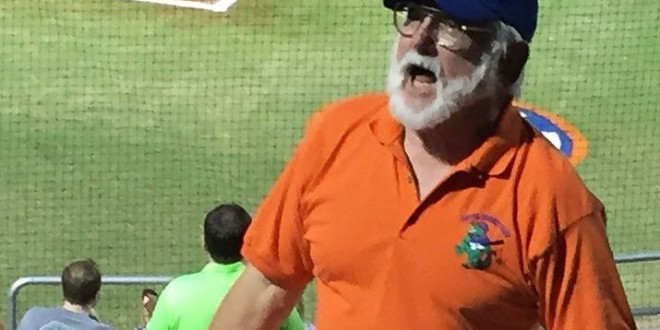 Burleson pumping up the home crowd during a night game. Photo taken by David Street.

Meet Gordon Burleson, a 77-year old retired engineer who is the University of Florida baseball team’s biggest fan. He is a UF alumnus and a lifelong Gator fan. At every home game, you can find him in the stands leading the Gator faithful in UF cheers and revving them up for the contest ahead.

Anybody who has been to a Florida baseball home game will likely say they noticed a man who led the cheers before the game started. That’s Burleson. The interesting thing about him is that he is not just a casual Gator fan, he is a Gator.

Burleson graduated from the University of Florida in 1962 with an engineering degree. He has been married for 55 years and has two children and three grandchildren, one of whom is a journalism student at UF.

Baseball is in the family blood. Burleson’s grandfather played pro ball in the 1900s and he learned a lot from him. Burleson himself played 21 years of slow pitch softball.

When describing what inspired him to lead the cheers, Burleson said he sat near a group called the Hecklers and didn’t hear anybody leading cheers so he took it upon himself to do so. One day, Burleson was able to strike a deal with the people working the PA system. Whenever he does his cheer, they turn their music down.

Burleson has received feedback from fans, some from people he does not even know.

“People call me Gordon and I have no idea who they are.”

Burleson believes the fans appreciate what he does because of the way he pumps up the crowd. Numerous fans have told him he does a great job of firing up the crowd with excitement and anticipation.

The impact of Burleson’s fanatical dedication to the Gators is not just felt by the crowd. It is also felt by the team. Burleson knows head coach Kevin O’Sullivan and his wife very well. Two years ago, he was at their house with the team where third baseman Josh Tobias got the team to sign a big poster that read, “Thank you, Gordon.” The poster, which was an appreciation of Burleson’s dedication to the team for many years, was framed at Burleson’s house.

Burleson is a big fan of Gator baseball, so naturally he knows quite a bit about the team. When asked what he thought O’Sullivan’s greatest strengths were, he said they were recruiting and pitching. He’s not wrong. The Gators have ranked in the top eight in Collegiate Baseball’s recruiting rankings for seven consecutive years. This past year, in fact, they were ranked number one in recruiting. As for pitching, the Gators have ranked among the top NCAA Division 1 teams in pitching five times during O’Sullivan’s tenure.

The thing that impresses Burleson most about the Gators is their defense. Last year, for example, the Gators achieved the second best defensive rating in NCAA history.

Burleson really likes the team’s chances of winning the College World Series championship this year and he should. The Gators were the unanimous preseason number one ranked team across all college baseball. They returned a solid cast from last year to go along with a top-ranked recruiting class. They’re also 33-5 and tied for first in the SEC with South Carolina.

Nobody should question Burleson’s loyalty to the Gators. He has been to games where only 500 people attended. He would like more fans to show up to better support the team.

“I sure would love to see our stadium filled up every day,” Burleson said.

More fans should go to Gator baseball games. They would see a lifelong Gator fan who excites the crowd with his energy and passion before each home game. They would see a man who is an all-around friendly guy and who is respected and appreciated by the fans and by the team itself. As the signed team poster in his house testifies, Gordon Burleson is Gator Baseball’s biggest fan.