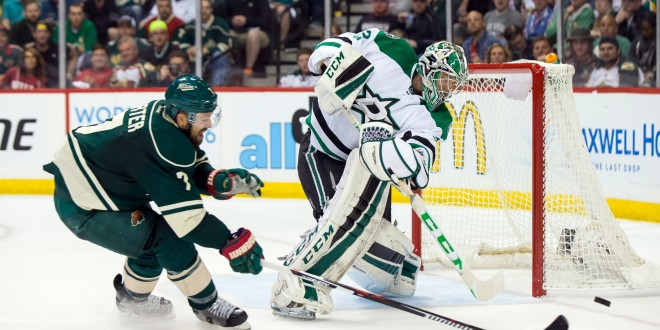 Playoff Action Heating Up in the NHL

The first round of the Stanley Cup Playoffs is now in full stride and is not going anywhere. Three games were on slate last night and each of them brought thrills to hockey fans everywhere.

First off, the Washington Capitals took a commanding 3-0 series lead in their first round series against the Philadelphia Flyers, winning 6-1. Things did look promising for the Flyers in the opening seconds of the game; with their backs clearly against the wall, Michael Raffl gave Philly an early lead with a goal in the first minute. It went all downhill from there for the Flyers.

The Capitals scored six unanswered goals from there on out. Alex Ovechkin put two in the back of the net for his fifth multi-goal game in his postseason career. He added an assist as well that catapulted him on top of the Washington record books for most points in Capitals postseason history. Philadelphia stayed aggressive throughout the game, but Washington goalie Braden Holtby finished with 31 saves on the night. Caps coach Barry Trotz says his team will not let up in this series.

A team that also had their backs against the wall but responded with a win is the Minnesota Wild. Down 2-0 in their series against the Dallas Stars, the Wild came from behind in Game 3 to win 5-3 behind a strong performance from Jason Pominville. The Stars were in the driver’s seat for practically the entire first period as they were up 2-0, but in the final minute Chris Porter scored to give the Wild some life. Minnesota didn’t look back from there as they scored three more unanswered goals and ultimately took the game.

Left wing Chris Porter says that having control over the puck really helped his team.

Probably the most intense and electrifying game from last night’s games was between the Los Angeles Kings and San Jose Sharks. The Kings and the Sharks scored in the first period and would not get the puck in the net for the rest of regulation. Both teams were pressing hard all the way into overtime, when Tanner Pearson got the puck right in between the legs of Sharks’ goalie Martin Jones. Pearson says his team was able to get the job done when it counted.

Tonight, it’s going to be an even bigger slate in the Stanley Cup Playoffs. The Tampa Bay Lightning will be on the road against the Detroit Red Wings, the Pittsburgh Penguins will be at Madison Square Garden to face he New York Rangers, the Anaheim Ducks will square off against the Nashville Predators, and the St. Louis Blues will play the defending champions Chicago Blackhawks.

Senior at the University of Florida. Working at ESPN Gainesville for four years, covering Florida football, softball, and baseball.
@FJuncadella
Previous Will They Play Together Again?
Next Meet Gator Baseball’s Biggest Fan