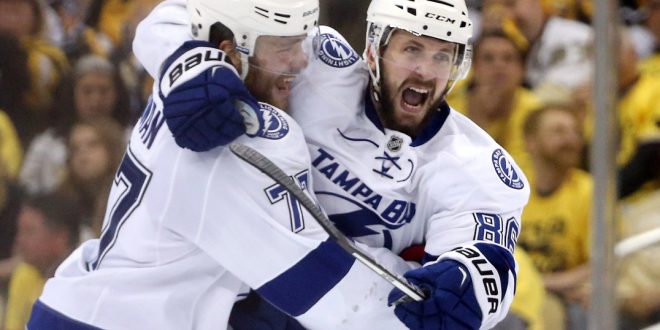 A Win Tonight Sends Lightning Back to Stanley Cup Finals

The Tampa Bay Lightning are 60 minutes away from going to the Stanley Cup Finals. After a come-from-behind, overtime win against the Pittsburgh Penguins Sunday night, the Lightning have to win just one more game toget to the finals.

They don't ask how, they ask how many. #PITvsTBL https://t.co/dqPVPSaYOg

Goalie Andrei Vasilevskiy continues his relief of injured Veniza Trophy finalist Ben Bishop, matching up tonight against Penguins goalie Matt Murray. The Lightning however are unconcerned with who will be in the Penguins’ net. Lightning Steven Stamkos is still out as well.

For the Lightning, a win not only clinches the Eastern Conference championship but it would also give them rare back-to-back Stanley Cup Finals appearances. Only four teams in NHL history have ever made it to the finals in consecutive years. Lightning forward Alex Killorn says the team is excited to be playing this meaningful game at home.

Lightning head coach Jon Cooper enjoys watching the team, and sees a “quiet calm” over the team. The Lightning will be careful not to take anything for granted, a mistake defensemen Matt Carle says the team made in last year’s Stanley Cup run.

Carle: "You don't want to take anything for granted… We know it's going to be a tough game." #PITvsTBLhttps://t.co/kqFbzMPKUZ

Coverage for Game six of the Eastern Conference finals begins tonight on ESPN Gainesville 95.3 FM at 7:30 p.m. The game can also be seen on NBCSN with  puck drop around 8 p.m.