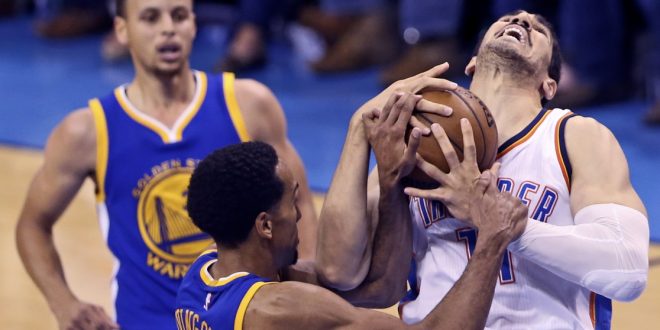 After a Game 5 victory, the Golden State Warriors will head back to Chesapeake Energy Arena in Oklahoma City where they will fight to keep their title hopes alive again when they play the Oklahoma City Thunder in the NBA Western Conference Finals.

This is of course, the same Warriors team that holds the title for best regular season record of all time. The Warriors were able to snag Game 5 away from OKC 120-111 and move the series to 3-2 in favor of the Thunder, but they still face a dangerous elimination situation.

Earlier in the series Golden State looked like they were playing without the usual, high-flying, high-scoring energy we’re accustomed to but they were able to recapture some of that with help from the crowd. Now though, the Warriors have to leave the safety of their home crowd and travel to an extremely hostile environment with a jacked up team and jacked up fan base.

"We play better when we're having fun. We played like we were really stressed in OKC, and it showed." pic.twitter.com/Mp7FA8jBAk

Thunder head coach Billy Donovan says they will take Game 6 to focus on getting better. Kevin Durant was good in Game 5, scoring 40 points, just one shy of his playoff single-game record. Couple that with Russell Westbrook’s 31 points and eight assists and the Thunder can officially say their superstars are producing in the playoffs, and KD says that’s exactly what they should do. The Thunder’s big men have been good too. Stephen Adams and Serge Ibaka combined for 21 points and 18 rebounds in Game 5 and they have done well controlling the paint.

The Thunder will look to eliminate the defending champs in Oklahoma City on Saturday, but who will the winner of the Western Conference face?

The early but obvious answer would’ve been the Cleveland Cavaliers as they looked downright dominant in the series leading up to the conference finals but two wins in a row at home for Toronto reignited the North’s hopes.

The Cavs squelched some of those hopes with another strong showing in Game 5 where they beat Toronto 116-78, a game that featured the largest halftime deficit in playoffs history at 65-34. Kevin Love shot 8 of 10 including 3 of 4 from beyond the arc for 25 points. LeBron James and Kyrie Irving chipped in with 23 points each. LeBron says they will treat this game as their Game 7 as they send the series back to Toronto for Game 6 where the Cavaliers and their Big Three look to punch their ticket to the NBA Finals.

Game 6 between the Cavaliers and the Raptors will be at 8:30 EST on ESPN.

EMPTY api-answer: No JSON received - is the API down? Check the URL you use in the shortcode!