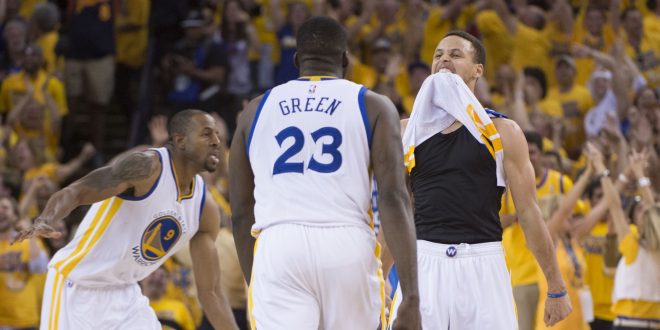 The Bay has been unkind to the Cleveland Cavaliers.

The Golden State Warriors completely dominated Game 2 of the NBA finals Sunday night, winning 110-77.  It was a night to forget for Cleveland as the Cavs shot 35.4 percent from the floor and were outscored 58-33 in the second half.  To top it all off, Kevin Love left the game early in the second quarter with a head injury, caused by a strike from the elbow behind the head by Harrison Barnes. Cleveland finds itself down 2-0 in the series with one of their star players questionable, and Golden State playing arguably its best basketball all season.

The game started off very close with both teams trading baskets. Cleveland kept pace with the Warriors as they ended the first quarter on a 8-2 run to take the lead 21-19. But after that, it was all Golden State. The Warriors lead was built as they drained everything in sight knocking down 54.3 percent from the floor and 45.5 percent from three-point range. Draymond Green led the Warriors in scoring with 28 points, shooting 5-of-8 from long distance. LeBron James led the Cavs effort with 19 points.

Warriors guard Steph Curry credits the effort to the whole team in getting the win. Curry was even shocked at how his team blew Cleveland out of the water. Curry finished the night with 18 points and nine rebounds.

Game 3 of the NBA Finals moves to Cleveland in what looks like a must win situation for the Cavs. Don’t forget, the Warriors were down 3-1 to Oklahoma City and rallied to take the series so anything is possible, but the Cavs will most likely have to play at the top of their game to have any chance of pulling out a win.

"We're still here and we have a chance to turn this series around." #ALLin216https://t.co/7sUb5KxDhY