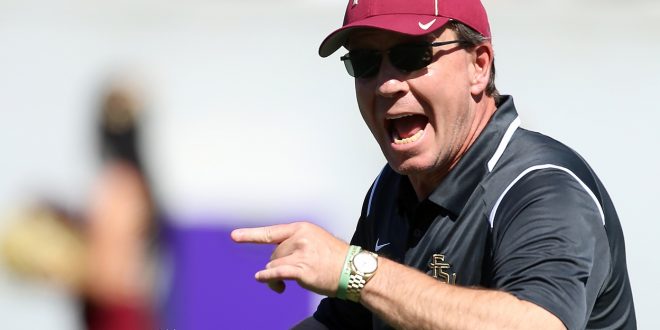 The final two-a-day practice of the Seminoles fall camp was also the first day that Head Coach Jimbo Fisher decided to restart practice.

Fisher attributed the need for the restart to the lack of mental toughness that he saw from the players Monday.

“We’re getting mentally tougher, but we’re not as strong as we need to be,” Fisher said. “We’ve got to grind it out. We’re in those dog days of camp. You’ve got to work and create habits. No matter how you feel, how sore you are, we’re getting there. We’re not quite there yet.”

Some of the players were shocked that the practice would be restarted, with junior defensive tackle Derrick Nnadi adding that he had heard him (Fisher) throw it out there before, but he never thought he would actually do it.

The practice ended up lasting an hour longer than scheduled, which in the Florida heat means even more punishment.

The extended practice led to the team’s second scrimmage of the Fall, a couple days later on Wednesday, which Fisher wasn’t especially pleased with.

Fisher said that the restart was necessary to improve the team’s mental toughness but there’s still more that needs to be done.

“That’s how camp is,” Nnadi said. “Yeah it’s to help you get used to plays and all that. But more, it’s getting you mentally tough for the whole season.”

The Seminoles will open their season on Monday, September 5 against Ole Miss, and the toughness they’ve gained this fall will be tested.