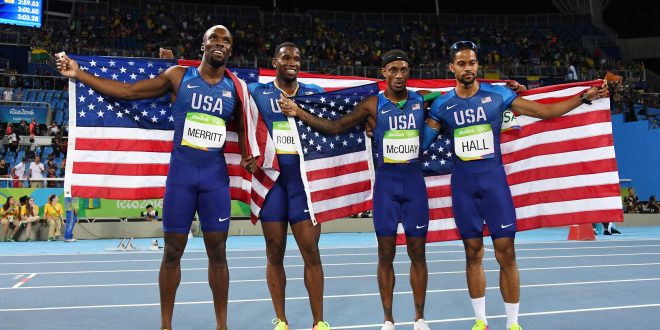 A Look Back at Gators Track in Rio

Whether you’ve heard this stat or not, the fact that if the University of Florida was its own country  they would be ninth in the world in gold medals during the 2016 Summer Olympics.

Focusing on the track and field events, the University of Florida had 12 men and women competing for their respective countries, but also representing the orange and blue.

Eight of the Gators in Rio were returning Olympians, including Tony McQuay, who paired with first time Olympian Arman Hall to run the first two legs for Team USA’s gold-medal-winning 4×400 relay. Novlene Williams-Mills added to her three bronze medals with a silver for Jamaica in the 4×400 relay.

Florida track and field head coach Mike Holloway hasn’t missed an Olympics since 1996. He could not speak higher about his former and current athletes, especially when talking about gator chomping.

Genevieve LaCaze (Australia) finished 12th in the women’s 5,000 meters final, as she clocked a 10-second personal record, she also set a personal record in the 3,000-meter steeplechase final.

Stipe Zunic (Croatia), made his Olympic debut, finished eighth overall in the shot put qualifying round and went on to finish 11th place in the final.

Holloway, entering his 14th season as men’s coach, and ninth as women’s, says he hopes this trip sparks success to come for these men and women.