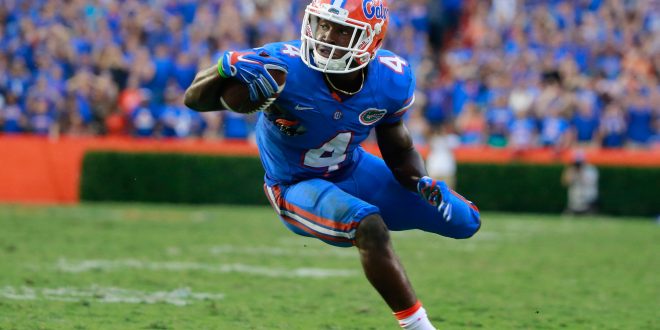 Brandon Powell Excited to Take the Field with Teamates

With the Gator football team returning to the Swamp on Saturday to face the University of Massachusetts Minutemen, wide receiver Brandon Powell is excited to get back on the field after facing some struggles last season.

Although Powell is a junior, he still is getting comfortable as a wide receiver. In fact, he says that he really didn’t feel comfortable playing the position until this summer.

Last season Powell mostly served as the primary kick returner and he was also injured a lot this past season with his foot.

Coming off of the injury, he now has a new pair of shoes that were specially made for him to give him more comfort. With being healthier this year, he wants himself and his team to just “play fast” as a way to just do what they can to win many games this season.

He’s also excited for his teammates. With Antonio Callaway’s success last season, but struggles with issues off the field it wasn’t until recently he was cleared by head Coach Jim McElwain to resume play this Saturday. Powell is excited to return knowing that he is an important asset to the team.

Powell believes that speed is important, and is also excited for the different running backs on the team this season. Powell says that JUCO transfer redshirt junior Mark Thompson and freshman Lamical Perine make great additions to the team especially with their size and speed.

Although quarterback Luke Del Rio is a redshirt sophomore, he has been through three different schools. He was a walk-on at Alabama, transferred to Oregon State, but then transferred to Florida this past year and had to sit out due to NCAA transfer rules. Del Rio also has never started an official game throughout his college career. Powell enjoys Del Rio’s ways of motivating the team, especially over the summer. He definitely sees that there has been a shift in positive energy with the team since Del Rio has been named as the starter.

With game day near, Powell and the rest of the Gators are excited to prove themselves with the strength, speed, and skills they have gained over the past year.