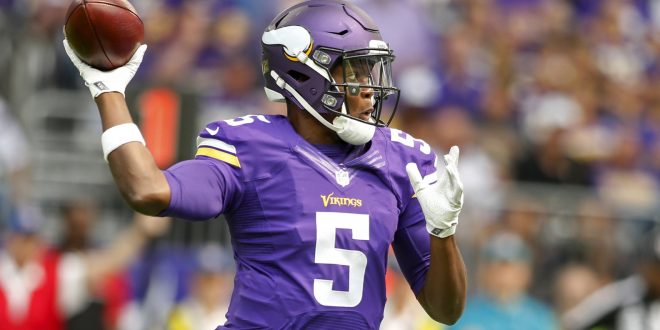 The worst fears of Minnesota Viking fans have been confirmed.   On Tuesday night, the team revealed starting quarterback Teddy Bridgewater suffered a complete ACL tear and dislocated knee. Bridgewater dropped back to pass during a drill, then went down — clutching his knee in pain.

The only sounds to be heard at the time of the injury, were players shouting expletives, and helmets hitting the ground after being thrown in frustration. Before the full extent of the injury was revealed, head coach Mike Zimmer said the team is prepared to move forward without their budding young star.

In 2015, the young signal caller was one of the most efficient passers in football. Bridgewater posted the ninth highest completion percentage in the NFL at 65.3 percent (better than Super Bowl winning quarterbacks Joe Flacco, Eli and Peyton Manning, and Aaron Rodgers).

Minnesota is thin at the quarterback position. Veteran Shaun Hill could be the new starter; he has been a starter in the league before and last season picked up a win for the Vikings over the St. Louis Rams after Bridgewater left the game with a concussion.  Wisconsin rookie Joel Stave is also on the roster.

NFL players from around the league took to social media to share their thoughts on the news.

Praying for you lil bro @teddyb_h2o 🙏🙏

@teddyb_h2o Thinking of you and praying for you! Tough times don't last, tough people do!

Team officials opted to end the practice, the final of the preseason, after the injury. The Vikings host the Los Angeles Rams in their final preseason game this Thursday.

Bridgewater is expected to make a full recovery.