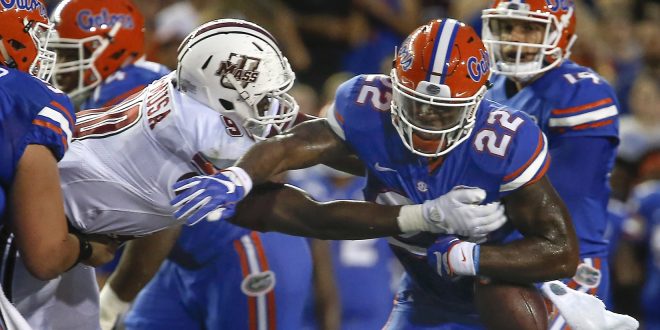 Following Saturday’s 24-7 home victory over the UMass Minutemen, the Florida Gator football team (1-0) will get back to work this week in preparation for the visiting Kentucky Wildcats (0-1).

However, there is no denying that this will be a challenge for Florida. According to McElwain, an early conference game will force the Gators to “grow up fast.”

Injury-wise, Florida took a big hit Saturday by losing junior wideout Dre Massey, who will miss the rest of the season after undergoing surgery on his knee. Meanwhile, senior linebacker Daniel McMillian will sit out this week after playing through the pain of a high-ankle sprain. Gator linebacker Jarrad Davis says Florida needs younger players to step up in McMillian’s absence.

Meanwhile, Davis says Florida doesn’t focus on the 29-game win streak they hold over Kentucky, explaining that preparation is the only way to guarantee a win.

Defensively, McElwain praised the efforts of Davis and fellow linebacker Alex Anzalone, saying that they’re among the best in the entire country. On the other side of the ball, the coach says wide receiver Brandon Powell provided an offensive spark while tailback Jordan Scarlett proved himself as a ball carrier.

Moving forward, McElwain also says the offense has a responsibility to create more explosive plays, while maintaining that starting quarterback Luke Del Rio performed well. Del Rio says he feels about the same as he did heading into Week 1, as he expected some initial hiccups — but Florida will need to finish long drives with touchdowns.

An area that McElwain feels needs work is the offensive line.  He stressed the importance of setting the tone at the line of scrimmage, explaining that offensive line play needs to improve, especially against Kentucky’s sizable defensive line.

Meanwhile Del Rio says his preparation for Kentucky is simple; maintain his weekly routine and execute the coaches’ game plan.

I'm a senior studying Political Science at the University of Florida. Multimedia Sports Reporter for ESPN Gainesville 95.3 and WUFT - Passionate about life, sports, and fitness.
@charliejordanuf
Previous Florida State Rallies to Beat Ole Miss
Next UCF Knights Hope to Have a New Armor in Upcoming Travels to Ann Arbor