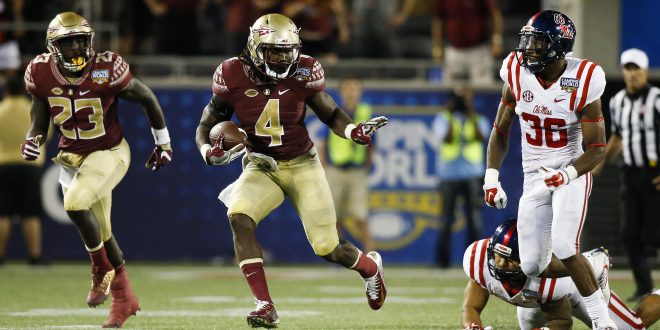 With three minutes left to play in the first half, the Florida State football team trailed the Ole Miss Rebels by 22 points. The Noles’ offensive line was getting handled up front and Ole Miss quarterback Chad Kelly was having his way with their secondary. Whatever Jimbo Fisher said to his players at halftime, it worked. It might have sounded something like this.

Whether what Fisher said was the reason or not, the Seminoles came roaring back after the half to beat Ole Miss 45-34.

Perhaps an overlooked aspect of the game occurred just before the first half ended.  FSU quarterback Deondre Francois, who had struggled for much of the first half, marched his team down to an end of the half touchdown to salvage some points to make it a 28-13 game.  The number four ranked team in the country opened their eyes after intermission and in the second half, the Seminoles came alive. After being carried largely by tailback Dalvin Cook it was the redshirt freshman Francois’ time to make a stand. He threw for 419 yards in the game including two touchdowns, the second most all time by a freshman in his first game at FSU. Cook had 192 all purpose yards and became the first FSU running back with over 100 receiving yards since 2006.

The Noles dominated time of possession especially in the second half, controlling the ball for just over 42 minutes of the game. They also did the little things well, including having special teams success. Kicker Ricky Aguayo had large shoes to fill replacing his brother who was drafted by the Buccaneers this year. He did more than fill shoes in his opener, he took a step to start what looks to be a great career going six for six in field goal attempts.

Roberto Aguayo never made 6 FGs in a game.

His little brother Ricky just broke the FSU record by kicking his 6th in his first game.

Florida State, in part thanks to Aguayo, starts the season 1-0 after the 45-34 comeback win over Ole Miss. The Seminoles are 10-9 when trailing by double digits under head coach Jimbo Fisher. FSU will take on Charleston Southern in their home opener on Saturday before taking off to Louisville for a road test on September 17.