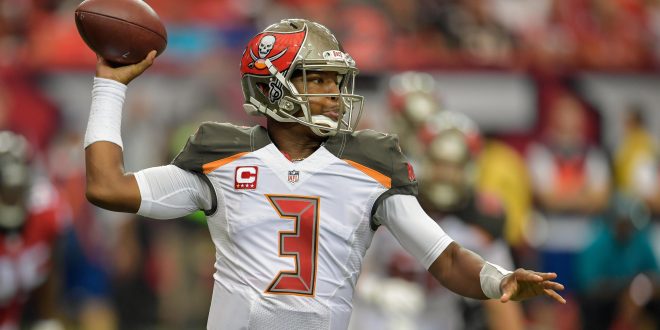 Jameis Winston Off to a Good Start

Buccaneers’ quarterback Jameis Winston is quickly developing into a new and improved elite player in the NFL. Tampa started off the season with a 31-24 win over their division rival Atlanta Falcons in Week 1. Winston had a slow start during the first quarter, but that was forgotten by the time he finished, posting four touchdowns and completed 23 of 33 passes for 281 yards. He finished with a passer rating of 122.6, which was the third highest of any quarterback in the league.

The slow starts seem to be a routine for Winston, as it is what he did for the most part at Florida State. Just last year there was a debate about whether the Bucs should use their first overall pick in the draft on Winston. There were questions regarding his on-the-field performance because of his slow starts and inconsistencies and there were off-the-field questions regarding his character and maturity.

For now, Tampa looks like it made the right choice with the coachable quarterback. Winston took control of his diet, his conditioning, his stamina, his core strength and his footwork during the offseason. He shed 15 pounds from his rookie year playing weight and has made a lot of progress in his passing game. He is just 17 games into his NFL career and he has already inspired his fellow teammates with his first-in, last-out work ethic.

@Jaboowins is a winner!!!! True competitor, LOYAL teammate, and a close friend. Sky is the limit would be a understatement

Winston says he is self-assured and feels confident with the playbook and offense this year.

In his rookie year, he threw for 4,042 yards and had 28 combined passing and rushing touchdowns. The Bucs finished last in the NFC South at 6–10, but they remain hopeful this season.

Winston says his primary focus is on the team’s performance and results from week-to-week.

That feeling when you find out @Jaboowins was named NFC Offensive Player of the Week #WTSP pic.twitter.com/TwusJZLEg5

Tampa Bay will be on the road again as they face the Cardinals on Sunday.