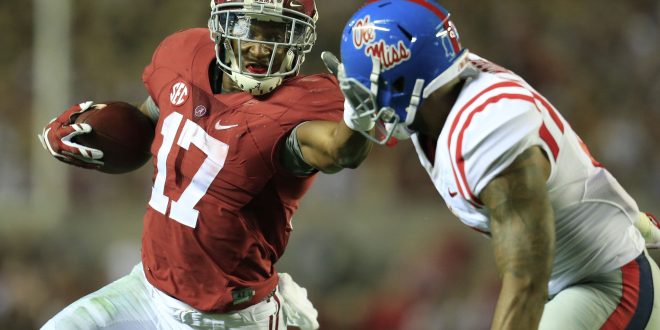 Since the start of 2014, Alabama football owns a nearly spotless 26-3 record. But of those three blemishes, Ole Miss proudly claims two. On Saturday, the Rebels try for their third win against the Tide in as many years when they open their SEC slate.

Ole Miss going for 3 vs Alabama

Ole Miss Head Coach Hugh Freeze and his team are excited at a chance to take on the number one team in the country and recapture that success from 2014 and 2015. Two seasons ago, the Rebels took down a then-ranked No.3 Alabama 23-17. The following season, the Rebels were even more impressive, taking down a No.2 Alabama team in Tuscaloosa 43-37, marking the first time Mississippi won back-to-back games in their storied series. Despite the rare chance at a third victory in a row, Freeze says he’s put it out of his mind and focused on the task at hand.

One big concern for No.19 Ole Miss (1-1) is their offensive line. Alabama’s (2-0) pass rush is fast and strong, only allowing 16 points in two games this season, one of which was against then-ranked No.20 USC who considers itself to have a fortified O-line. The Rebels are a bit beat up, having lost to Florida State 45-34, which gives Freeze some concern about the physical preparedness of his O-line.

Given Alabama’s excellent run defense (87 rushing yards against in their first two games), it’s up to Ole Miss QB Chad Kelly to propel his team down the field. The senior signal caller has racked up 532 passing yards with seven touchdowns and three interceptions this season, hooking up with six different receivers for scores. Opposing him is ‘Bama QB Jalen Hurts. The freshman established his hold on the job with a 23-for-36 performance against Western Kentucky where he passed for 287 yards with two touchdowns and no interceptions.

This game also represents another matchup of the Kiffin brothers. Lane, Alabama’s offensive coordinator, and Chris, Mississippi’s defensive line coach, face off. Freeze jokingly suspects the two haven’t talked much this week. Like Kelly, Lane and Hurts have the luxury of plenty of receivers to put up big numbers.

Calvin Ridley gets a lot of the attention for Alabama, but ArDarius Stewart leads the team with 205 receiving yards so far. And considering Mississippi lost starting CB Ken Webster in the opening week, it’s up to 5-foot-8 Carlos Davis and 5-foot-10 Jalen Julius to prevent the game from getting out of hand.

Alabama has dominated Ole Miss in the past, but could the Rebels make it three wins in a row this Saturday? pic.twitter.com/RfwxBPdnYg

The Tide is favored to have a 67 percent chance of winning according to ESPN’s Football Power Index. Kick off is at 3:30 p.m. on CBS.