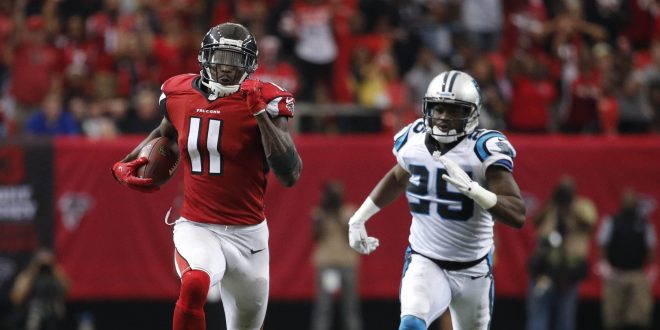 Week 4 NFL Round Up

It was yet another exciting week of action in the NFL that featured an historic performance in Atlanta, a meeting of two old rivals, and two big divisional upsets. Here is a look at some of the notable games that taking place this past Sunday.

Julio Jones made many fantasy owners happy as he helped the Atlanta Falcons defeat the dwindling Carolina Panthers (1-3), 48-33. Hauling in 12 passes on 15 targets, Jones accumulated 300 receiving yards and one touchdown. This surpassed his previous career-high of 259 yards in a game and lands him on the No. 6 spot for the most receiving yards in a game.

Jones couldn’t do it alone, however, as Matt Ryan threw for four touchdowns and amassed a franchise-record 503 passing yards. Ryan did a good job spreading the ball around as he hit Jacob Tamme, rookie Austin Hooper, Aldrick Robinson, and of course Julio Jones for touchdowns. This game marked the first time in NFL history that a quarterback and wide receiver were responsible for over 500 and 300 yards, respectively.

For the Panthers, it was an absolute nightmare. Their 571 yards allowed were the most in franchise history and they lost quarterback Cam Newton for the rest of the game after he took a hard hit on a two-point conversion early in the fourth quarter. Backup Derek Anderson would prove no better as he threw two late interceptions to seal Carolina’s fate.

Da Bears Get Their First Win

Goldman, the Chicago Bears (1-3) entered their game against the Detroit Lions (1-3) looking to avoid an 0-4 start. Behind 302 passing yards and two touchdowns from Brian Hoyer, 111 rushing yards from rookie Jordan Howard, and 111 receiving yards and a touchdown from Eddie Royal, the Bears prevailed over their NFC North rival by a score of 17-14.

The depleted Bears defense held its own as they allowed no offensive touchdowns and picked off Matthew Stafford twice. Detroit’s only score in the game came on a punt return just before the two-minute warning in the fourth.

The Dallas Cowboys (3-1) and San Francisco 49ers (1-3) have some serious playoff history as they have played each other in six NFC Championship games. In Sunday’s meeting, the flames of this old rivalry were rekindled as Dallas won 24-17. With star receiver Dez Bryant out with an injury, the sizzling rookie duo of Dak Prescott and Ezekiel Elliott led the Cowboys towards their third straight victory.

Prescott was again impressive completing 23-of-32 passes for 245 and two touchdowns. He has still not thrown an interception in 131 passing attempts

through four games. Complementing his QB on the ground, Ezekiel Elliot rushed 21 times for 138 yards and a touchdown. The rookie halfback believes he is finally finding his place in the offense. This Cowboy victory knotted the all-time series up at 17-17.

As if losing the game wasn’t bad enough, the 49ers also lost linebacker NaVorro Bowman for the season as he injured his Achilles. The Chip Kelly era in San Fran has been off to a rough start as the 49ers are now 1-3 on the season. Soon enough, Kelly may have to force his hand and play Colin Kaepernick amidst the national anthem controversy.

Pats Get Shutout For the First Time Ever at Gillette

Having won two of their last 12 against the New England Patriots (3-1), the Buffalo Bills (2-2) came into Foxborough liking their chances against a Brady-less Pats team. New England’s offense was ineffective with rookie Jacoby Brissett leading the way. The Buffalo defense stepped up in a big way sacking Brissett twice and rendering Julian Edelman and Rob Gronkowski non-factors.

Even without Sammy Watkins, the Bills did just enough on offense as Tyrod Taylor threw for 246 yards and found running back LeSean McCoy for the only touchdown of the game. Kicker Dan Carpenter drilled three of his four kicks and accounted for 10 points.

New England had not been held scoreless since the Miami Dolphins blanked them 21-0 on December 10, 2006. This is the first time ever that the Patriots have been shut out at Gillette Stadium. Needless to say, the Patriots are probably not too concerned considering they are 3-1 and Tom Brady is calling that. When they head up to Buffalo in Week 8, they’ll remember this loss. That may not bode so well for the Bills.

Entering the game as a 9.5 point underdog, the Los Angeles Rams (3-1) continued their hot start as they defeated the Arizona Cardinals (1-3) by a score of 17-13. With Todd Gurley only running for 33 yards on 19 carries, Case Keenum put the team on his shoulders as he threw for 266 yards and two touchdowns. Both of these touchdowns went to Brian Quick for his only pair of receptions in the game.

The Cardinals lost quarterback Carson Palmer to a concussion and it was up to backup Drew Stanton for the final three minutes. After throwing what seemed to be the game-sealing interception, Stanton had one last shot with the score 17-13 and less than a minute remaining. He would bring the offense to the Los Angeles 37-yard line, but there would be no Hail Mary as he was intercepted a second time to end the game.

John Brown had a stellar game for Arizona, as he reeled in 10 receptions for 144 yards. However, the only Cardinal who found the end zone was Michael Floyd with less than 30 seconds in the first half. Besides their receiving corps, Arizona has many questions to address if Carson Palmer is out for an extended period of time and if their running game doesn’t start clicking.

For the Rams, this was a huge victory. They are making Los Angles a nice home as they look to make some noise in the NFC West.

After a six-interception performance against the Kansas City Chiefs last week, New York Jets (1-3) quarterback Ryan Fitzpatrick again struggled to find his receivers. The Seattle defense picked him off three times and sacked him four times. Matt Forte was an absolute non-factor as he rushed 14 times for a measly 27 yards. The only Jet who played well was Brandon Marshall, who caught four balls for 89 yards and a touchdown. Forte said after the game that the team needs to get back in sync offensively.

On the Seattle side, quarterback Russell Wilson was unstoppable. He completed 23 of 32 passing attempts for 309 yards and three touchdowns. He made Jimmy Graham relevant again as the big tight end brought in six passes for 113 yards. Wilson made better use of his running backs in the passing game then on the ground. He found both C.J. Spiller and Christine Michael for touchdowns. His other touchdown pass went to rookie wideout Tanner McEvoy for his first NFL score.