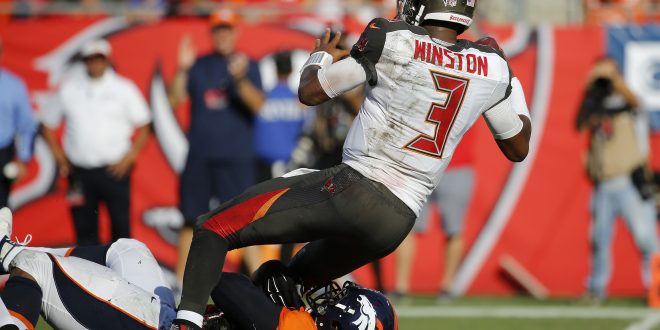 Buccaneers Fall to the Broncos

The Tampa Bay Buccaneers are now 1-3 after suffering a 27-7 loss to the Denver Broncos on Sunday afternoon. As the score line shows, Tampa Bay was never quite able to recover from committing three turnovers against the defending Super Bowl champions.

Bucs quarterback Jameis Winston says that sometimes he does too much and just needs to focus on his job.  Winston was under pressure all game long, getting sacked five times and throwing two interceptions. He went 17 of 35 for 178 yards.

Head coach Dirk Koetter knows that the Bucs can’t win if they continue to commit as many turnovers as they have. Despite the loss however, Koetter knows the team will work together towards getting better and so will he as the head coach.

In the first half, the Bucs also received bad news on the injury front as tight end Brandon Myers left with a hip injury and linebacker Noah Spence left with a shoulder injury. Both did not return to the game. Adding to their worries, defensive tackle Gerald McCoy left the game with a calf injury in the second half and did not return.

Rookie quarterback and Deltona native Paxton Lynch made his NFL debut for the Broncos after Trevor Siemian left the game due to an injury to his left shoulder. Lynch finished the game 14 of 24 with 170 yards passing.  He also threw one touchdown and no interceptions.

Next up for the Bucs is a road game against the losing team in last year’s Super Bowl, the Carolina Panthers.