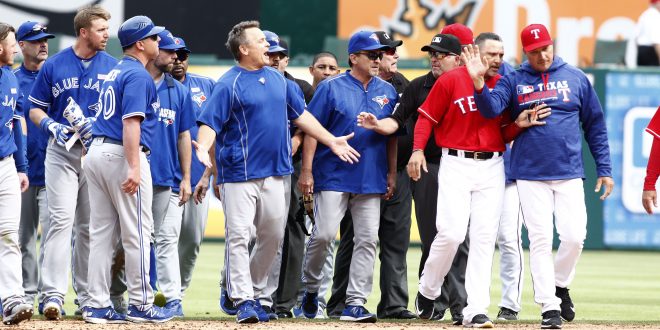 Game one of the ALDS, best of five series, between the Texas Rangers and the Toronto Blue Jays will start Thursday at 4:30 p.m. from Global Life Park in Arlington, Texas.

The Blue Jays won their wild card game versus the Baltimore Orioles on October 4, 5-2 to make it to the ALDS against the Rangers. The Rangers finished the season 95-67, in first place in the AL West.

Cole Hamels will take the mound for the Rangers in game one.  Hamels finished the year with a record of 15-5 with an ERA of 3.32, and 200 strikeouts.  Hamels struggled down the stretch. His ERA rose almost a full point in the last month of the season.  Mlb.com notes that Hamels was  0-2 with a 6.97 ERA in his four starts against Toronto. Hamels’ knows that he has to be on his game if he wants to give the Rangers a chance against the Blue Jays.

Marco Estrada will take the mound for Toronto in game one.  Estrada finished the year with a record of 9-9 with an ERA of 3.48 and 165 strikeouts.  Macro finished the year strong. In his last three games Estrada only allowed two earned runs over 19 total innings.  Estrada knows he needs that kind of good outing to help Toronto get the win in Texas.

The Rangers Lineup is highlighted by Elvis Andrus and Adrian Beltre.  Andrus leads the team in batting average this season, he is hitting .302 with eight homeruns on the year.  Andrus is 2-10 this year against Estrada with one extra base hit.  Beltre is the run producer for the Rangers with 102 runs batted in.  He ended the year with 175 hits and 32 home runs. Beltre was 1-9 this year against Estrada and two walks.

to the Bautista Odor fight earlier this year

The bad blood runs deep with these two teams, and fans of both sides are excited to get this series underway.