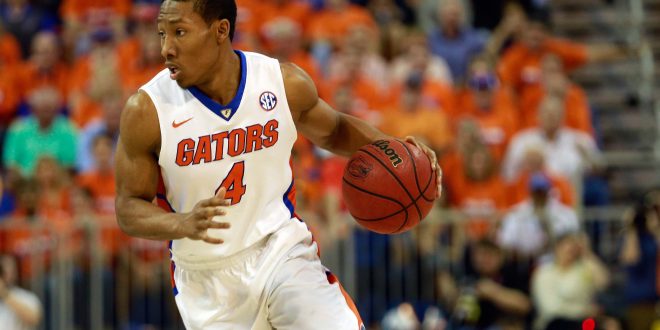 With last season’s leading scorer—forward Dorian Finney-Smith—now playing for the Dallas Mavericks, sophomore guard KeVaughn Allen will be expected to play a pivotal role on the team.

As a freshman, Allen averaged the second most points on the team with 11.6 points per game. He also averaged 2.7 rebounds along with 1.6 assists per game.

Coming into his second season, the Arkansas native believes he can score from anywhere on the court.

His impressive scoring outings during his freshman year show Allen is capable of being a scoring threat every night. He was named SEC Freshman of the Week after scoring 19 points in game that knocked off ninth ranked West Virginia University. Additionally, in the Gators loss to Florida State, Allen was not to blame as he scored a career high 32 points. It was the fifth most points scored in a game by a Gator freshman.

KeVaughn Allen’s biggest accomplishment of his first year with the Gators was being named to the SEC All-Freshman team.

Allen says the Gators approach will include energy and up-tempo basketball.

Last season, the Gators missed their goal of qualifying for the NCAA tournament. Instead, they were the No. 2  seed at the NIT. They were upset in the quarterfinals by the No. 4 seed George Washington University. GW eventually went on to win the NIT championship. Prior to being eliminated, the Gators defeated the University of North Florida (seven seed) and Ohio State (three seed).

Despite falling short of last year’s goal, Allen believes the Gators can make the NCAA tournament this time around.

After making the final touches to its 2020 roster, the Florida men’s basketball team has …