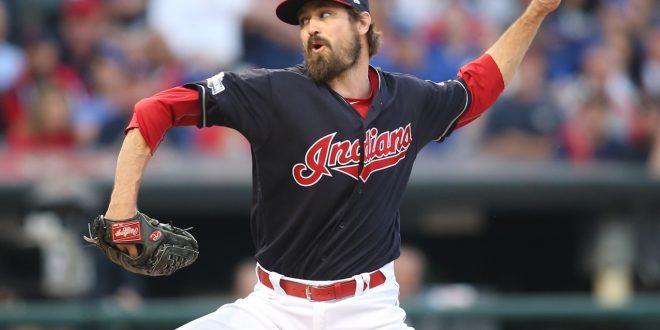 The New York Yankees’ may be shaking their heads over trading their relief pitcher to the Cleveland Indians.  Gainesville native Andrew Miller has become the face of the Indians en route to pitching nine scoreless innings this postseason.

Currently in the ALCS

Since the Yankees sent Miller to Cleveland for top prospects, the Indians have been paving the road to success.  With Miller’s help, they are leading the Blue Jays 3-0 in the ALCS best-of-seven series and are one game away from the World Series.

Throughout his short time with the Indians he has put up a minuscule 1.55 ERA.  The Indians haven’t just been using him in the ninth inning, but putting him out in the most important situations. Cleveland manager Terry Francona isn’t afraid to unleash the dominant lefty anywhere from the fifth to the ninth inning. If it’s a high leverage situation, Miller toes the rubber.

Blue Jays right fielder Jose Bautista says he’s seen two different sliders out of Miller: a short slider and one with more break and a sharp turn.  This combination makes this nasty arm even harder to hit.

From Gainesville to Chapel Hill

Miller started his career out of F.W. Buchholz High School in Gainesville and brought his talent to the University of North Carolina at Chapel Hill in 2004.

As a Tar Heel, he Miller broke the schools’ single-season and career strikeout record.  Baseball America named him National Player of the Year and he received the Roger Clemens Award as the nation’s top pitcher.

UNC retired his number 33 this year.

Days in the Pros

The Detroit Tigers drafted Miller sixth overall in 2006 for $5.45 million with a $3.55 million signing bonus.  He played with the Class-A league with the Lakeland Tigers and was called up to the majors quickly after pitching in only three outings with five scoreless innings.

After not making the playoff roster in 2006, Miller picked himself back up.  He got another shot after the Tigers’ starter Jeremy Bonderman was injured.  He pitched six scoreless innings , but was sent down to the minors once Bonderman recovered.  Miller was called back up in later in 2007.

The Tigers then traded Miller to the Florida Marlins in the infamous Miguel Cabrera deal. Miller had to work through an injured oblique in 2009 and came back making 20 appearances.  The lefty never found his footing in Miami, posting a horrid 5.89 ERA in 220 innings. The Marlins then shipped him to the Boston Red Sox in 2011.

The Red Sox won the first four games Miller started in 2011 and Miller was credited with three victories.  He improved in his four years with the Sox after eventually converting to relief full time and blossomed.

With the Orioles, Miller made an appearance in the 2014 ALDS sweep of the Detroit Tigers and later traded to the New York Yankees in December 2014.

Miller really showed up with the Yankees, starting with his first save in April 2015.  He was the first Yankee with eight saves in 20 games.  He ended the year winning the American League Relief Pitcher of the Year Award.

Miller never turned into the top-of-the-rotation starter teams envisioned when he pitched for UNC. As a starter, he posted a 5.70 ERA in 325 innings. But as a reliever? 2.61 ERA in 303 innings.

Road to the World Series

Game four and possibly last of the ALCS is today at 4 p.m.