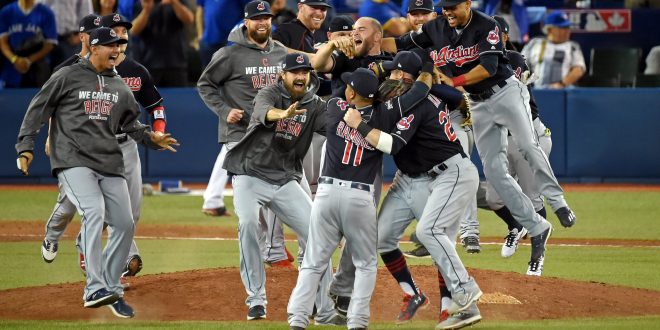 On Wednesday night, Buchholz High School alum Andrew Miller joined Dennis Eckersley, Mariano Rivera and Koji Uehara as one of only four relievers to win an ALCS MVP. Miller was lights out in the American League Championship Series vs. Toronto, pitching 7 2/3 innings while giving up no runs, no walks, three hits and striking out 14. Miller’s 14 strikeouts are an ALCS record for a reliever. He also recorded three holds and one save in the series. And despite not being a starter, Miller is very pleased to be in a reliever role.

This Andrew Miller Slider moved so much horizontally that the slow-motion camera couldn't keep up pic.twitter.com/FyItTH7Vyl

The Indians have now advanced to their first World Series since the 1997 season, when they lost to the then Florida Marlins in the franchise’s first ever World Series. Cleveland may have taken the road less traveled, but Miller says it doesn’t matter how you get there.

Since the AL won the Midsummer Classic for the fourth straight year, the Indians will have home-field advantage. In this year’s all-star game, Cleveland pitcher Corey Kluber earned the win for his team. Andrew Miller talked about how excited he is for Cleveland to experience a World Series again.

Now that the team has advanced, they will play either the Cubs or Dodgers who play in Game 5 of the NLCS tonight. That series is tied up at 2-2. With the World Series coming up, Miller knows that being ready on the spot is just part of a reliever’s job.

The Gainesville native who played high school locally at Buchholz High School for the Bobcats was traded by the Yankees to the Indians after the All-Star game. Miller’s wife is also from the Gainesville area, but attended Oak Hall. Before his time in the majors, Miller played collegiately at the University of North Carolina and has had many stops along his professional career.

Other top performers for the Indians in the ALCS included Francisco Lindor, who batted .368 with a .979 OPS, Coco Crisp, who had an OPS of 1.025 and Carlos Santana, who had two homeruns.

The World Series will begin on October 25 in Cleveland.