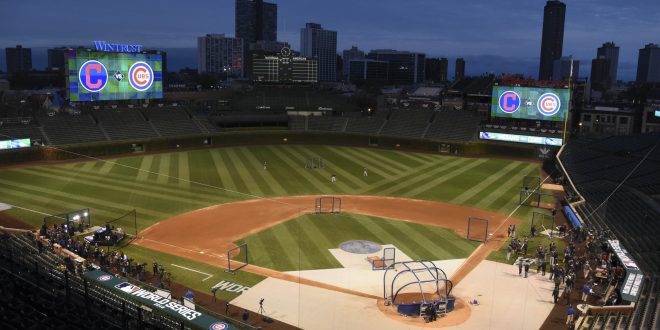 That was the last time Wrigley Field hosted a World Series game. The Chicago Cubs lost 9-3 to the Detroit Tigers in Game 7.

General Manager Theo Epstein and Manager Joe Maddon have transformed the Cubs from baseball mediocrity to a young, superpower team. A key to the success of the Cubs is the type of environment Chicago has put in place. Relief pitcher Pedro Strop talked about how well Maddon and the team is at build chemistry. The effort from the organization has led to progressive success on the field. Last year, the Cubs lost in the NLCS after a 97-win season. This year, Chicago led the majors with 103 wins and are hosting their first World Series game in 71 years.

With the next three games being at Wrigley, the Cubs have a chance to hoist the championship trophy in Chicago. A Game 3 win will be crucial for the enthusiastic Cubs. Taking the mound for Chicago tonight will be Kyle Hendricks. After a stellar regular season (MLB-leading 2.13 ERA and a 16-8 record), Hendricks has proven to be the Cubs’ best pitching option. Maddon mentioned how effective Hendricks has pitched this postseason, and how the team plays around him.

Chicago’s offense started the World Series off slow by being shutout in Game 1. The Cubs had seven hits in the game with three of them belonging to Ben Zobrist. Things turned around in Game 2. Chicago put five runs on the board with 7-of-9 batters cataloging a hit.

Indians Aren’t Backing Down Yet

Tito knows it’s going to be WILD at Wrigley, but the @Indians are ready for it. https://t.co/svC1hDoe5h #WorldSeries pic.twitter.com/B7mZaIVgUR

The Cleveland Indians have been the darling of the AL this year. Similar to the Kansas City Royals a few years ago, the Indians are winning with dominate pitching and an efficient offense. The recipe worked in Game 1. Corey Kluber pitched a masterful six innings that was cleaned up well by Cleveland’s relief pitcher Andrew Miller.

After having the scripts reversed in Game 2, the burst of enthusiasm around Cleveland started to quiet down. It’s hard to match the intensity of a team that has not won a championship in 108 years. Star shortstop Francisco Lindor put it best. He said the team needs to stay focused on their road trip to Chicago. The team should just focus one winning one out of the next three game. Why? One win is all it takes for the Indians to force another game in Cleveland. At that point, Cleveland might have enough momentum to break Chicago’s heart.

What to Watch For…

Kyle Schwarber will be limited to being a pinch hitter in Game 3. Schwarber has been a catalyst for the Cubs’ offense in the first two games with a .429/.556/1.127 stat line (AVG./OBP/OPS). Kris Bryant and Javier Baez have been the most consistent hitters for the Cubs. The two have the best batting average, with at least 30 at-bats, RBIs, and total bases on the team in the playoffs.

Pitcher Josh Tomlin will take the mound for the Indians tonight. Tomlin had an average regular season (13-9 record and 4.40 ERA), but has turned in solid playoff performances (2.53 ERA and a 8.44 K/9). Francisco Lindor has been Cleveland’s best position player throughout the playoffs. With a .342/.375/.954 line and two home runs, Lindor’s consistency has helped stabilize the offense while the pitching staff dominates the opposition. Two-time All-Star Jason Kipnis is 1 -or-9 in the World Series so far. With a juiced up Wrigley Field, the Indians will need each one of their stars to show up in a big way Friday night.

History will be made in Chicago at 8 p.m. on FOX.

Previous Magic Look For First Win of the Season against the Pistons
Next CFB Preview: Big 12, Big 10 and Pac-12 Feature Big Matchups