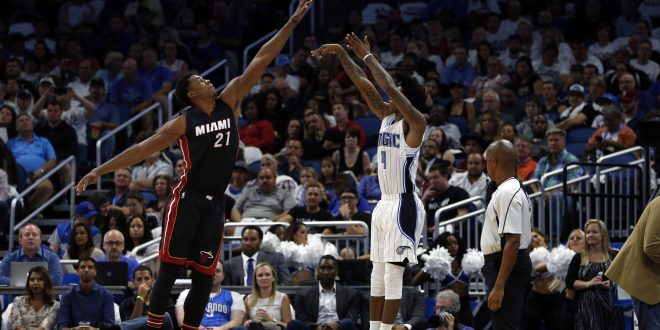 The Charlotte Hornets and Miami Heat take to the hardwood tonight in a divisional matchup at 8 p.m. With key roster changes from both teams, each look to find their new identity.

After a hard fought seven-game series in the most recent playoffs, the Hornets and the Heat face each other for the first time since game 7 in Miami.

Young players such as Tyler Johnson, Justice Winslow, and Hassan Whiteside will be asked to take the role of future Hall of Famers Dwayne Wade and Chris Bosh. Whiteside, the anchor of the Heat defense, logged in a strong performance against the Orlando Magic with 18 points 14 rebounds and four blocks.

Kemba Walker and the Hornets hope to increase their wins this year in the Eastern Conference with additions like Roy Hibbert and the re-signing of Nicolas Batum. Walker continued his strong play from last year logging 17 points and 8 assists in a win against the Milwaukee Bucks in their season opener. Michael Kidd-Gilchrist, a former second overall pick in the 2012 draft, will be determined to silence the critics. In the Hornets season opener, he recorded 23 points and 14 rebounds in a win against the Bucks.

In tonight’s game, the point guard matchup may be the deciding factor in the game between Goran Dragic and Kemba Walker. Not only will Dragic need to keep command of his offense but he will be asked to defend the explosive Walker on the perimeter.

The matchup in the center position will also be fun to watch between Roy Hibbert and Hassan Whiteside. Both known for their defensive capabilities with need to enforce their dominance in the paint. Whiteside’s progression as an offensive threat will be key in this game for the Heat as well as the rest of the season. Look for Miami Heat guards to feed Whiteside easy buckets around the rim.

Tonight’s game will tipoff at 8 p.m. in the American Airlines Arena in Miami.

The last several days across the U.S. have been nothing short of violent, disastrous. Cities …