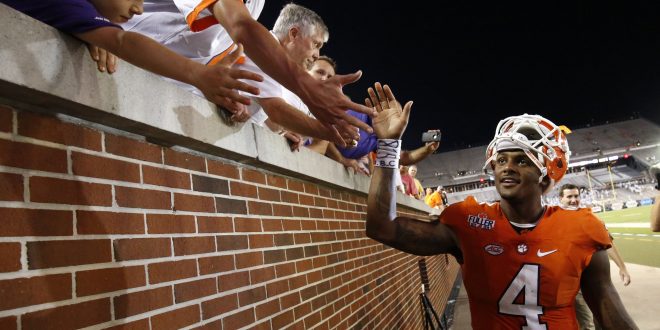 With playoff implications on the line, Deshaun Watson and the No. 3 Clemson Tigers will travel to Tallahassee to face Dalvin Cook and the No. 12 Florida State Seminoles Saturday night. Although head coach of the Tigers, Dabo Sweeney, has not coped so well against the Seminoles as head coach going 3-5 in the past eight years, he will look to get his first win at Doak Campbell stadium this weekend.

The Tigers have a few things they will need to do in order to get a road win and keep their College Football playoff hopes alive: Run the ball effectively, play tight, and control the line of scrimmage.

The Tigers have one of the best quarterbacks in the nation in Deshaun Watson and they also have one of the best running backs. Although Wayne Gallman suffered a injury in Clemson’s last outing, he has taken all the reps heading into the game. The Tigers tend to play how their running game plays and they need to have success in the run game in order to beat the Seminoles. They have averaged 6.5 yards a carry in their two big wins against Louisville and Boston College and will need Deshaun Watson and Wayne Gallman to do that this Saturday.

Clemson is 7-0 on the season, but of those seven games four of them have been within a one possession margin. If they want to make a playoff appearance they will need to tighten up in all facets of the game. Most of the momentum of the team is carried behind leader, Deshaun Watson, and he needs to make sure his offense is off to a quick start.

Control the line of scrimmage

Dabo Sweeney told the media that Florida State’s defensive line is probably the toughest they have faced all year. Clemson’s offensive line will need to do a good job controlling the line of scrimmage to open up running plays and give Watson enough time in the pocket to find the open receivers.

Swinney: FSU's defensive line is as good as we've played up front. Their two tackles are very difficult to move.

Although the Seminole’s have no shot at the College Football Playoff with two losses they are a tough team to beat, especially at home. Coach Jimbo Fisher, said that this team reminds him of the 1989 team that won nine straight after losing the first two. Florida State will need to do a couple things if they want to beat a very good Clemson team: Get their star the ball, force turnovers, and contain the run.

Get their star the ball

Everyone knows that Dalvin Cook is one of the nation’s best running backs. At any moment, he can spur the offense and take one to the house. Despite the fact that he had a slow start to the season and had no 100+ rush games in the first three games, he has had four straight since then. Over the last four games he has accounted for 910 total yards and six touchdowns. The Seminoles will need to get him the ball in order to win the game.

Deshaun Watson has had eight interceptions thus far and Florida State will need add to this statistic in order to win. Not only will they have to get turnovers, but they will need to capitalize on these turnovers.

This might be the biggest thing Florida State will need to focus on this Saturday. With Watson and Gallman in the backfield, Clemson has two threats to run the ball. The defensive ends of the Seminoles will need to contain Watson and make sure that there aren’t any read options that they get beat on.

Make sure to tune in on Saturday night at 8 p.m. to watch two great coaches and two great football teams in a head to head matchup.