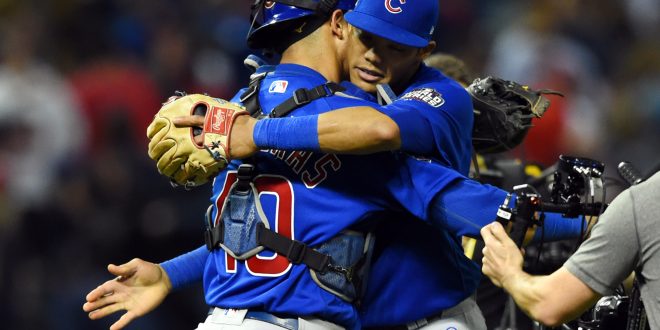 If you are a Cubbies fan, then you are one happy camper. Chicago did not let an elimination game get in its way. The best-of-seven series is now even at three games each after the Cubs vanquished the Indians with a 9-3 win at Progressive Field.

It was the Cubs’ night from start to finish on Tuesday.

In the first inning, Kris Bryant went deep and homered on a fly ball to left center field and the momentum continued due to some miscommunication in the outfield.

Bryant says it was always the plan to get ahead early in the game.

Addison Russell dropped in after two straight singles from Anthony Rizzo and Ben Zobrist and hit a fly ball for a two-run double.

Russell set up six runs to help the Cubs post a big win over the Indians. At the top of the third, he blasted a grand slam to center field to give Chicago a commanding 7-0 lead over the Indians.

Russell says he is going into the final game with the mindset that it is like every other game, but he is going to give it his all.

Cleveland’s Jason Kipnis tried to rally the tribe.  The Indians added an RBI single by Mike Napoli in the fourth and earned a solo home run with two outs by Kipnis in the fifth to cut into Chicago’s lead.

Cleveland started to show some signs of life, but the Cubs tacked on two more with a home run in the ninth to put the game out of reach.

Cubs head into Game 7 with some momentum. pic.twitter.com/1xV5gVWykk

Cleveland manager Terry Francona says the Indians are going to learn from their mistakes quickly and he is confident going into Game 7.

The Cubs set up the 37th winner-take-all game in World Series history. Chicago will face the Indians one more time in a final Game 7 on Wednesday night in Cleveland. Chicago will try to end the longest championship drought of 108 years.