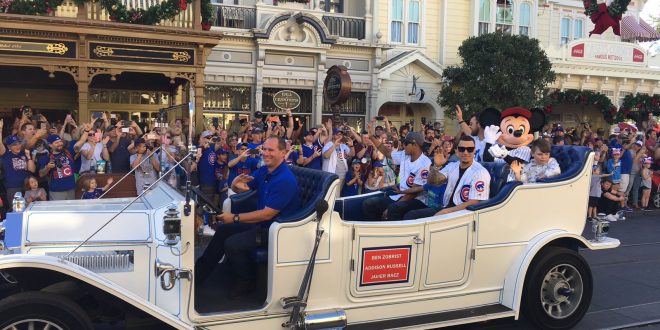 Once upon a time, there was a baseball team called the Chicago Cubs, who dreamed of the day they would win another World Series Championship.  On Wednesday that dream came true as the Chicago Cubs are now the reigning world champions after beating the Cleveland Indians in Game 7 after 10 innings. The 108-year curse was finally broken and fans all over the world rejoiced!

The last time the Chicago Cubs won a World Series was 1908. A lot has changed since then, Ford’s Model T’s where not even invented yet and Theodore Roosevelt was the president.

Walt Disney was only seven years old and was living in Chicago at the time. He might of listened & cheered to the Cubs winning the World Series with his family listening to the radio. The Cubs win might have resulted in him being a huge baseball fan for life.

At seven years old, Walt was probably playing baseball with his friends and drawing in spare time having no idea the legacy he would leave behind. In this lifetime, Walt Disney became a world famous animator, entertainer, entrepreneur, and businessman. Disney’s legacy has resulted into six theme parks around the world and hundreds of classic movies. Just like Walt Disney’s dream all started with a mouse, the Chicago Cubs dream may of taken years in the making but they still achieved it!

To celebrate the spell being broken, the Chicago Cubs where honored at Magic Kingdom on Saturday during a special championship parade. Cubs from all over the world rejoiced on Main Street U.S.A as they got to see Ben Zobrist, Addison Russell and Javier Baez up close. The parade started at 4:30 p.m. and the route was from Liberty Square to the front of Main Street U.S.A. 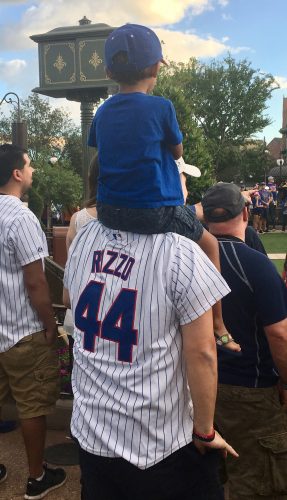 For Disney and baseball fans a like, it was truly a sight to see as the players came down Main Street with Mickey and Goofy wearing Cubs attire. The best view of the parade is watching it down Main Street. Main Street U.S.A is actually based off of a small Illinois town where Walt grew up. The street Walt grew up loving baseball and where his dreams ran wild.

If you visited the Walt Disney World parks on Saturday you saw hundreds of Chicago Cubs fans young and old dressed in blue and red, proud of their team. These loyal fans camped out along the parade route after the 3 o’clock parade in order to get the best view.

Some fans even made baseball Mickey ears and matching Cubs shirts for the special occasion. This day will go down in history as the “best day ever” for Cubs fans. A story that will be told for ages.

Dreams really do come true and if you didn’t know that already, ask a Chicago Cubs fan.

If you want to see the parade for yourself, go to Walt Disney World’s Facebook page as they Facebook lived the whole parade for fans to see.

Hello my name is Kaitlin Alexander, a passionate story teller and lover of sports. Fun facts about me: I am a world traveler, interviewed all three UF Heisman Trophy winners, and a former intern of Bleacher Report. Follow me on Twitter: KalexanderUF
@KalexanderUF
Previous Florida Volleyball: Another SEC Road Sweep, Stays Atop SEC
Next Chiefs Shut Down Jaguars to Hand Them Sixth Loss