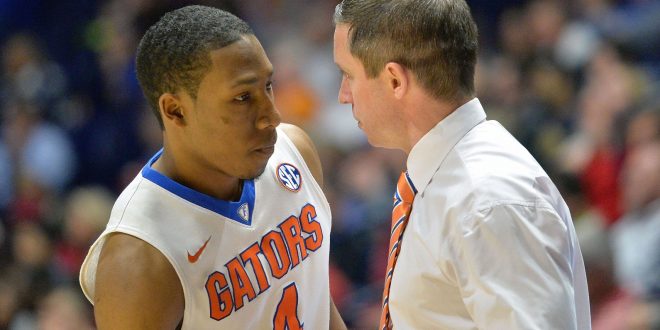 Florida Looks to Start Strong vs. FGCU on Friday Night

If a glorified scrimmage vs. Eckerd College wasn’t enough for your Florida basketball fix, fear not. The Gators officially start their season on Friday night in Jacksonville vs. Florida Gulf Coast University at 7:30 p.m. All action starting from the tipoff can be seen on the SEC Network+. The contest can be heard as always on the Gator IMG Sports Network and Sirius 108/XM 389.

UF has taken on FGCU three times in program history, with the most recent coming in 2015 when the Gators took down the Eagles, 70-50. The most memorable matchup between the two teams came in 2013, when FGCU’s “Dunk City” campaign came to an end against the 3rd-ranked Florida Gators in the Sweet 16 of the 2013 NCAA Tournament.

The Eagles are ranked #20 in CollegeInsider.com’s Mid-Major Top 25 and are only in their sixth season of eligibility in D-1. FGCU only lost two players to graduation last year, and are returning 83% of their points, 86% of their assists and 87% of their rebounds from last season. Florida Gulf Coast is also the preseason favorite to continue their reign as ASUN champions, after receiving 6 of 8 first-place votes in the ASUN Preseason Coaches Poll. They finished 12 total points ahead of UNF, with NJIT finishing third.

Joe Dooley is in his fourth season as Florida Gulf Coast’s head coach. Since taking over for Andy Enfield, Dooley has posted a 65-38 overall record. He led his team to an NIT appearance in his first season, a CIT appearance in his second season, and last season, brought his team all the way to the NCAA Tournament before losing to UNC in the Round of 64. FGCU won the Atlantic Sun tournament last season, which is what propelled them into the big dance.

KeVaughn Allen and John Egbunu were both named to the Coaches’ Pre-Season All-SEC 2nd team. Coach White has praised Allen multiple times in the preseason as the Gators’ best shooter, and has consistently talked about how high Egbunu’s effort has been all offseason. Both are expected starters in Friday night’s contest.

Per UAA, all 11 players are available to play, with no injuries listed. Eric Hester didn’t practice last week, after being held out due to an illness, but appears to be fine for the opener. Kasey Hill had previously been dealing with a leg injury this off-season, but is also set to play and potentially start vs. FGCU.

Just as we saw with the Harlem Shake, the Mannequin Challenge is the newest social media craze. Mike White and his squad gave it their best shot below.

Mike White has officially signed two members to his 2017 recruiting class including DeAundrae Ballard and Chase Johnson. Ballard is the higher ranked of the two, and is a 4-star wing out of Southwest Atlanta Christian Academy. Ballard is ranked 65th in the 2017 ESPN 100, and is the Gators’ only signed player in the ESPN 100. He’s a versatile small forward who can flat out score from anywhere on the floor. Johnson is a 6’8″ power forward from Ripley, West Virginia and has a 3-star ranking, per ESPN. He’s a younger player, not turning 18 until his first semester as a freshman, but has a 36-inch vertical and can fly around the ball. Johnson has the chance to be a real productive rebounder for Florida in the future.

Watch this. Laugh. We tipoff tomorrow. See you there. #GoGators pic.twitter.com/zrbpdYtDJA