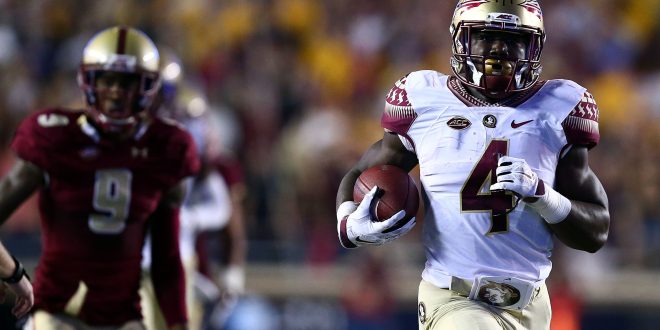 The Florida State Seminoles(6-3) are all set to host Boston College(4-5) this Friday. The Noles are now listed at 18 in the most recent College Football Playoff Rankings after going on the road and taking down NC State last week. Boston College will be looking to bounce back after getting blown out at home against Louisville last Saturday.

Both teams will have to deal with the challenges of a short week and FSU Head Coach Jimbo Fisher says he hates Friday night games. The early game will also be senior night for the Seminoles, despite FSU still having a remaining home game against rival Florida. Fisher explained the decision and also says star running back Dalvin Cook won’t take part in the ceremony.

Cook is also on the brink of breaking the FSU all-time rushing record. He’s just 126 yards away from surpassing Warrick Dunn who set the mark at 3,959 yards. Coach Fisher reflected on Cook’s career.

The Seminoles will also be without senior wide-out Jesus “Bobo” Wilson. He underwent career-ending foot surgery on Monday after missing the last two games with an injury suffered on Oct. 15. Coach Fisher says it’s a shame Wilson’s solid senior year is coming to an end.

The BC Eagles struggled last week to get their offense going against Louisville scoring just seven points. Boston College failed to score any points when these two teams met in Chestnut Hill last year. They’ll be looking to get their explosive play makers more involved so keep an eye out for leading receiver Jeff Smith and leading rusher Jon Hilliman.

FSU’s offense needs Dalvin Cook to have a better game than he did again NC State. The Wolfpack held Cook to 82 total yards(65 rushing and 17 receiving). Quarterback Deondre Francois is coming off a great performance and he’ll look to duplicate that success on Friday. He shared ACC Rookie of the Week honors after throwing for 330 yards and a touchdown.

The Senior Night ceremony will take place prior to kickoff. The game is scheduled to start at 7:30 p.m. in Doak Campbell Stadium and will be on ESPN2 and the WatchESPN app.

I'm an above-average golfer with surprisingly great touch around the greens. Click on my twitter link for some sports talk.
@Ry_McGinn
Previous Santa Fe High Football Takes On South Sumter in Regional Semifinals
Next Preview: Frostproof Bulldogs at Trenton Tigers