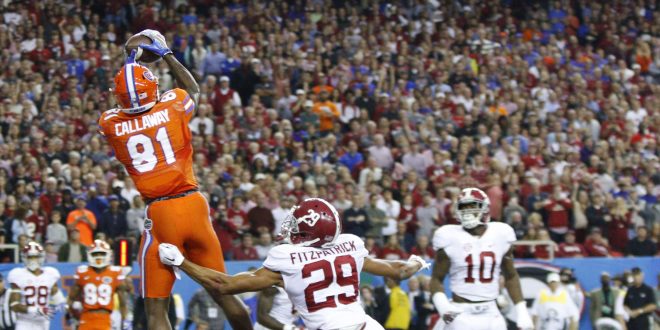 While the SEC may have dropped off a bit in the eyes of the college football world, what’s long been regarded as the nation’s top conference still received plenty of love on Bowl Selection Day. Twelve teams will be representing the SEC in a bowl, which ties for the most ever from one conference (12 in 2014).

Top ranked Alabama will be taking on No.4 Washington in the first 2016 CFP semifinal game. Fresh off the trouncing of the Florida Gators in the SEC Championship Game, the Crimson Tide are unquestionably the best the SEC has to offer. Widely considered the best team in the nation, look for Nick Saban and company to also represent the conference in the CFP National Championship Game.

The No. 14 Auburn Tigers will represent the Southeastern Conference in the Mercedes-Benz Superdome against the No. 7 Oklahoma Sooners. The Tigers, as the second-highest ranked SEC team, will take on the Baker Mayfield-led Big 12 champions.

No. 17 ranked Florida was hoping for bigger and better things, but will have to settle for playing Iowa on January 2nd. The matchup from Tampa will see the 115th ranked offense in the Gators taking on the Hawkeyes’ 120th ranked offense.

One of the most exciting matchups, at least on paper, seems to be the No. 20 LSU Tigers taking on the No. 13 Louisville Cardinals. The strong Tiger defense will certainly have their hands full when they take on Heisman hopeful Lamar Jackson from Louisville.

While the TaxSlayer Bowl may not be the sexiest name on this list, don’t tell that to Mark Stoops and company. This bowl marks the first time the Kentucky Wildcats (7-5) are in the postseason since 2010. As for their opponents, Kentucky will take on the 8-4 Georgia Tech Yellow Jackets.

What has been a turbulent season for the No.21 Tennessee Volunteers will culminate with a bowl game in their own home-state. While a victory over the 9-3 Nebraska Cornhuskers would not wash away all the bad, Butch Jones and company would certainly take it.

The Georgia Bulldogs (7-5) also fall under the category of “teams that were hoping for better” this season. The TCU Horned Frogs, at a measly 6-6 record, also underachieved this past season. Both teams will be looking to end their season on a high note.

It seems to be a reoccurring theme that SEC teams were looking to be playing for higher stakes come this time of year. The Texas A&M Aggies (8-4) were at one point 6-0, but lost four of their last six and find themselves playing in the Texas Bowl. Playing Kansas State in late December isn’t something the Aggies set out to do in the early part of the season, but at least the Aggie fan base won’t have to travel too far to get to the NRG Stadium.

The Arkansas Razorbacks (7-5) will face a tough test against No. 22 Virginia Tech in the Belk Bowl. Bret Bielema’s team lost two of their last three games, including a 28-24 loss last time out to Missouri.

Will Muschamp’s South Carolina Gamecocks (6-6) will, oddly enough, probably be considered underdogs by most in their bowl game against the 10-2 USF Bulls. The Bulls are led by QB Quinton Flowers, who is 10th nationally in total offense with 331.3 yards per game.

The Vanderbilt Commodores (6-6) will be participating in the postseason for the first time since the 2013 season. In only their eighth postseason game ever, Vandy will take on 6-6 North Carolina State.

Rounding out the SEC teams competing in bowl games this season are the Mississippi State Bulldogs. Of all the teams that underachieved, the Bulldogs may very well be considered the weakest. Sitting at a 5-7 record, the team will be heading to a bowl game due to there not being enough bowl-eligible teams. Their opponents on December 26 will be Miami of Ohio (6-6).

That game will be the first of these matchups, as the game is set to kick off at 11 a.m. and can be seen on ESPN.

@RickyRemis
Previous UCF Staying in Orlando for Cure Bowl
Next Florida Women’s Hoops Splits Games in Arizona; Up Next FSU