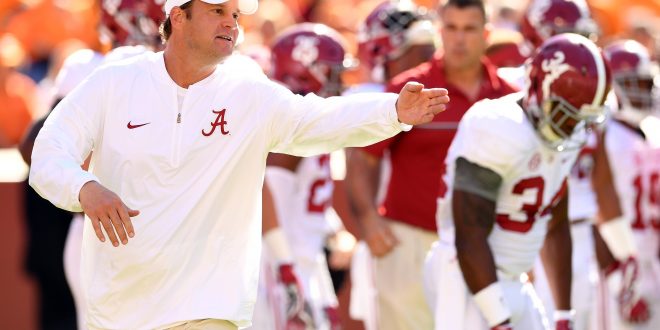 Alabama offensive coordinator Lane Kiffin accepted a five-year deal to coach the FAU Owls, according to multiple reports. The two sides had been linked for the past several days, and reports surfaced as late as Saturday saying the deal may have fallen through.

He is expected to remain with Alabama through the College Football Playoffs. Ed Orgeron pursued the 41 year old to be LSU’s offensive coordinator. Kiffin was also in the running for the Houston job before Major Applewhite was hired.

Kiffin, who’s been the Tide’s offensive coordinator since 2014, returns to head coaching for the first time since a four-year stint with USC from 2010-13. He led the Trojans to a 28-15 record (including finishing 6th in AP ranking in 2011) before being fired after a 3-2 start in 2013. The Nebraska native also coached Tennessee for one season in 2009 (7-6 record). He coached the Oakland Raiders from 2007-2008, tallying a 5-15 mark before getting canned after four games in his second season.

In four and a half seasons, he took his teams to two bowl games and lost both.

The Owls fired Charlie Partridge in late November after a three-year tenure that saw the team go 9-27. The school owns an all-time 76-115 record in its 16 years of existence. They last had a winning record in 2008, where they went 7-6.

Kiffin joins a competitive Florida head coaching fraternity that should make recruiting even tighter than it already was.

Alabama once again has an open coordinator position, leaving many to wonder who head coach Nick Saban will tab.

Temple and Western Kentucky are now the only FBS teams with open head coaching jobs.