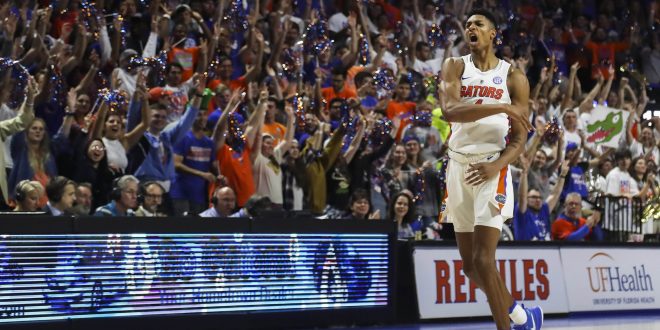 Besides Georgia and Kentucky, no other team has squared off against the Gators on the hardwood more than the Tennessee Volunteers. On Saturday night at 5:15 p.m., Florida will face Tennessee for the 123rd in program history at the Exactech Arena at the O’Connell Center. While Tennessee won the last match-up against the Gators in early January of 2016, Florida had won the past four games before it.

Hubbs and the Young Guns: Tennessee’s roster is one of the youngest in the SEC, featuring 8 freshman and only one junior and two seniors. While the team features few upperclassmen, Robert Hubbs III, one of the team’s two seniors, has taken over as the team’s most prolific scorer. Hubbs has played at least 18 minutes per game in every season at Tennessee, and is leading the team this year in time played, with 30.1 MPG. Hubbs is averaging 15.2 points per game and is one of the most efficient scorers in the SEC this year. He ranks fifth in the conference in field goal percentage at 52.5% and scored 21 points in the team’s most recent defeat against Arkansas on 9-14 shooting. Hubbs’ downfall is three-point shooting, where he’s shot an absolutely terrible 15.4%. The team as a whole is a rather poor shooting bunch, ranking 10th in both overall field goal percentage (49.6%) and three-point percentage (32.8%) in the SEC. The Vols’ next best scorer is Grant Williams, who to the contrast of Hubbs, is a freshman from Charlotte, NC. Williams has contributed a solid stat line this year of 10.8 points and 5.9 rebounds per game. He also had the first double-double of his young career against Arkansas, putting up 15 points and 11 rebounds in the loss. Tennessee’s shear amount of shots taken has them ranked 77th in the nation and t-5th in the SEC in points per game at 78.6.

“I like their team speed, their depth, they play 11 guys in double-figure minutes,” said Coach Mike White. “Dangerous offensively, despite being, so called, undersized. I’m not sure if Grant Williams is 6’5”, there’s no way that guy’s 6’5”, with the production that he’s given them. He’s been amazing as a freshman and Robert Hubbs is one of the most under-appreciated guys in our league, in my opinion.”

Rocky Bottom Defense: If scoring helps Tennessee stand above some of the other middle teams in the conference, their defense brings them back down to earth. The Volunteers rank 215th in the nation in points per game allowed, giving up an average of 73.2 per game. Despite winning four of their last six games, UT has given up at least 68 points in 5 of those games and at least 76 in three of them. Florida isn’t the best scoring team in the SEC, averaging just as many points as the Vols do on offense, but if they cause an early wound in Tennessee’s weak defensive setup, the Gators could be in for a high-scoring day.

Dome Sweet Dome: Florida finally played their first home, SEC game at the O’Connell Center this past Tuesday night, taking down the Ole Miss Rebels, 70-63. While the Gators only won by 7, they led by as much as 20 in the second half, and would’ve won by just about that had they not taken their foot off the pedal late in the final half. Florida forced 21 turnovers in that game and did a stellar job of breaking out into their transition offense. Canyon Barry tied his season and Gator career-high with 20 points off the bench, while KeVaughn Allen once again went off from downtown, knocking down 4 of his 7 three-point looks, finishing with 14 points. Kasey Hill was Mr. Everything for Florida against Ole Miss contributing a final stat line of 8 points, 6 steals, 5 rebounds and 5 assists despite turning the ball over 5 times. The bench as a whole was helpful in the win, giving the Gators 28 of their 70 total points.

“I think he’s really stepped up his game defensively,” said Coach Mike White in regard’s to Kasey Hill’s play vs. Ole Miss. “I think he’s become a much better defensive rebounder, creating more havoc, he’s leading more. Yeah, In a perfect world he’s 3-to-1 assist-to-turnover, takes really good shots, he leads us vocally, he’s a pest defensively, gets five or six rebounds, or even more – I’m stopping him. But other than a couple of misses and a couple of turnovers I wish we could get back from the other night, he played a really, really good game. When you get six steals, you’re using a lot of energy defensively. That was key.”

Injuries and Stomach Bugs: Keith Stone missed practice on Thursday with a stomach bug, but should be good to go on Saturday, per Coach Mike White. John Egbunu, who has been dealing with a hampered hamstring, played 23 minutes against Ole Miss, and is close to being 100%. No other Gators were listed on the injury report.

“Pleased with his attitude, pleased with the minutes he’s given us, I think he’s going to continue to fight to earn more minutes,” said Mike White when asked about John Egbunu. “I asked him today and he feels like he’s at or near 100%, so he’s been good and pretty consistent at practice lately.”

How to Watch and Listen: Saturday evening’s game tips off at 5:15 p.m., and can be seen on ESPN2 with Tom Hart and the always phenomenal Dick Vitale on the call. You can listen to the game, as always, on the Gator IMG Sports Network with Mick Hubert and Bill Koss on the broadcast. UAA has announced that the game is a sellout and registration has closed for student tickets. If the Gators come out with the same starting lineup as they usually do, expect Kasey Hill, KeVaughn Allen, Devin Robinson, Justin Leon and Kevarrius Hayes (more than likely starting for John Egbunu) to start.

#Gators enter Saturday's visit from Tennessee No. 24 in AP Top 25, but No. 3 in the RPI and with the nation's No. 1 strength of schedule.