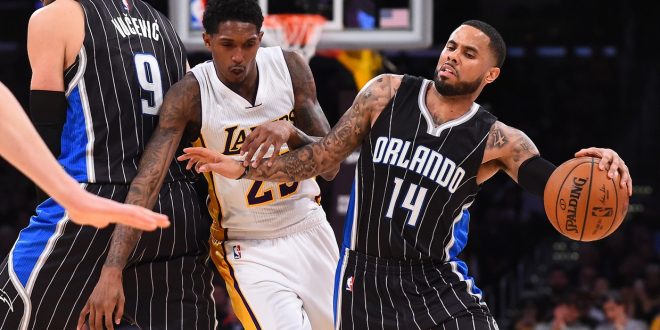 It’s not going to be easy, but it can be done. The Orlando Magic have 11 of their next 16 games on the road this month. After starting out their road trip in the wild west with a loss to The Lakers on Sunday, The Magic certainly have the ability to bounce back and win every single one of these away games. That should start with The Clippers tonight.

After going down 111 to 95 to Luke Walton’s squad, The Magic wants to show that they have enough ambition and endurance. But two nights off in Los Angeles, awaiting their game against The Clippers tonight, could have worn them down. Magic head coach Frank Vogel has a lot to prove. One of the big questions for him is how well can he keep his crew together on the road. If he can get through to these guys a lot better than Jacque Vaughn or Scott Skiles ever did, the wins will come. One player Vogel is looking out for is Clipper point guard Chris Paul.

Make no mistake, The Clippers have made themselves known in this 2016-17 season. Standing fourth in the Western Conference at 26-14, they know how to win games. This team allows minimal turnovers when it matters. However their rebound game has been known to be weak. As for the players, Blake Griffin and Brice Johnson are out for sure for this one. Austin Rivers was labeled day to day on Sunday.

The Magic have key players missing as well. Elfrid Payton and Serge Ibaka are both labeled day to day as of yesterday. If Ibaka is out, rumor has it that Jeff Green and Aaron Gordon will get their chance to shine. Vogel has one thing on his mind that could help his team beat The Clippers.

The team is still sitting at 12th place in the eastern conference, but all these road games could change that. They aren’t against the hardest teams, but decent ones none the less.

With The Trailblazers, The Jazz, The Nuggets and The Pelicans in the near future, time will tell if Vogel can utilize his players well known athleticism- and turn this team around as his first year winds down.

Previous What Does the Future Hold for the Oakland Raiders?
Next Heat Fall Short Despite Whiteside’s Huge Night