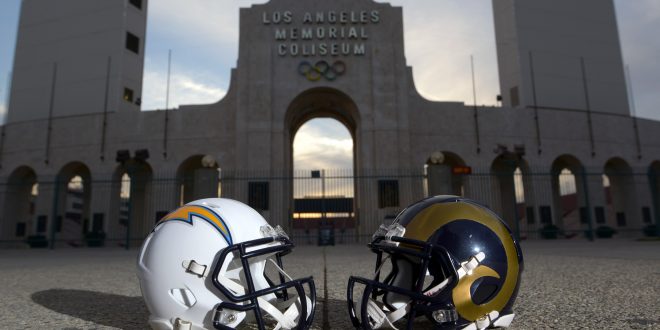 Mar 4, 2016; Los Angeles, CA, USA; General view of Los Angeles Rams and San Diego Chargers helmets and the Olympic torch at the peristyle end of the Los Angeles Memorial Coliseum. The Coliseum will serve as the temporary home of the Rams after NFL owners voted 30-2 to allow Rams owner Stan Kroenke (not pictured) to relocate the franchise for the 2016 season. Chargers owner Dean Spanos (not pictured) has an option to join the Rams in Los Angeles. Mandatory Credit: Kirby Lee-USA TODAY Sports

The San Diego Chargers are officially moving to Los Angeles to become the Los Angeles Chargers.  After much debate, the Chargers made the news official earlier today.

Chargers to Relocate to Los Angeles

Reasons for the Move

Loyalties run deep in sports, and fans are passionate.  San Diego fans are no different.  Many fans are not happy about the team’s departure from San Diego.

A few fans have dropped off gear in front of #Chargers Park. pic.twitter.com/4zCqEBJWzS

Although some fans are hurt by the move, many of the players see the move as a positive. The move is a chance to start fresh in San Diego.

For the next two years the Chargers will be using the LA Galaxy’s StubHub Stadium as their home.  This stadium only holds 30,000 fans and will be the smallest in the NFL.  After the two years, both the Chargers and Rams will move into City of Champions Stadium.

Remembering the Time in San Diego

Many great players have passed through San Diego. From LaDainian Tomlinson, to Kellen Winslow, to the University of Florida’s very own Wes Chandler.

Wes says he is devastated to see the team leave San Diego.  He and other Charger teammates plead with fans to try to get a new stadium in San Diego after 16 years of trying.  In the end though, their efforts were not enough and the Chargers elected to move.

The football history in San Diego will never be forgotten.  Although the team may be gone now, many will look back and say they were proud to be San Diego Chargers.