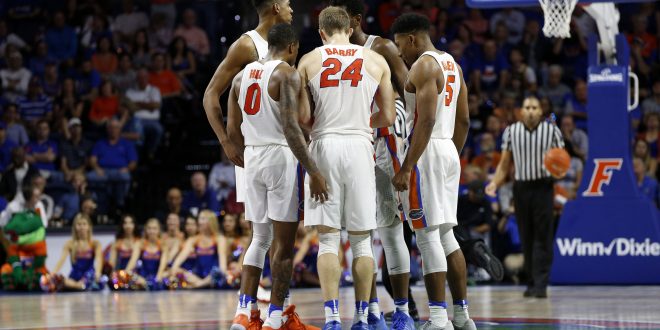 In a stat that goes to show the current state of the Southeastern conference, on Wednesday afternoon, when the #19 Florida Gators and #24 South Carolina Gamecocks meet in Columbia, it will be the first match-up of ranked opponents in the SEC this season. UF comes into the game with a 5-0 record in conference play for the first time since the 2013-2014, when the team went undefeated in the SEC. The Gamecocks are also undefeated in conference play after going 4-0 against Georgia, Texas A&M, Tennessee and Ole Miss.

In Florida’s 7 game win streak, #Gators have scored 80+ in 6 of the games. Florida has only allowed 75+ in one game during win streak.

Moving up the Rankings

In the most recent AP Poll, the Florida Gators moved up to #19 in the country, while #24 South Carolina is back in the Top 25 for the first time since Week 7. Both teams are in the RPI Top 25, as the Gators and Gamecocks rank 3rd and 25th respectively. According to KenPom, UF ranks 21st in both offensive and defensive efficiency in the NCAA. SCAR’s metrics fare far better on defensive efficiency, in which they rank 1st overall, than in offensive efficiency, where they come in at a measly 200th.

Like many SEC teams, South Carolina doesn’t just benefit from their defense, they survive off of it. The Gamecocks rank 1st in the conference and 8th in the nation in points allowed per game, giving up an average of 59.8 per match-up. Columbia’s finest make their money on defense off of their ability to force turnovers. South Carolina ranks 1st in the SEC and 12th in the nation in steals per game at 17.1 per contest. P.J. Dozier and Sindarius Thornwell, the Gamecocks’ most skilled duo, both average over two steals per game. South Carolina big man Chris Silva leads the team with 1.9 blocks per game, which ranks 7th in the SEC. Unfortunately for SCAR, their defense is superior to their scoring ability, averaging a low 71.7 points per game.

All three of South Carolina’s losses (Seton Hall, Clemson and Memphis) have come without leading scorer and senior guard Sindarius Thornwell. Thornwell was suspended for six games throughout the month of December in response to both possession of marijuana and driving under a suspended license charges. In 11 games played this season, the four-year veteran has posted 18 points and 7.1 rebounds per game, while shooting 40.5% from downtown, which ranks 4th in the conference. The tenacious scorer will come into Wednesday night’s contest off of his worst game of the season, in which he scored 10 points on 3-10 shooting in a 67-56 win over Ole Miss. Florida Head Coach Mike White talked about how much of an impact Thornwell has on the game and the league.

In terms of national media attention, the name mostly mentioned by college basketball pundits is Sindarius Thornwell. Despite the lack of coverage, P.J. Dozier has quietly posted an extremely respectful line of 14.9 points, 4.8 rebounds, 3.1 assists and 2.1 steals per game. He is shooting 41.2% from downtown and has posted six 20+ point games this season. In the team’s most recent win vs. Ole Miss, Dozier scored 16 of the team’s 67 points. Coach White applauded Dozier’s versatility earlier this week.

A well balanced game-plan has worked wonders for Mike White. The Gators are very even-keeled in their offensive and defensive abilities. Florida is 74th in the nation in points allowed per game (67.1) and 62nd in the country in points per game (79.0). UF has shot the ball consistently this season and rank 5th in both field goal (45.5%) and three-point percentage (35.7%) in the SEC. White summarized in his press conference on Tuesday afternoon that the team’s offense has improved tremendously, but that their defense was better a few weeks back.

If you like a style of basketball that looks similar to a fast-paced pickup game at the YMCA, look no further than the Florida Gators. UF has executed this strategy well, and have a +5.3 turnover margin, which ranks 8th in the country. The Gators have their fair share of blunders per game, averaging 11.4 turnovers per contest. Luckily for them, their defense has more than made up for the offense’s giveaways, coming away with 16.7 turnovers per game. South Carolina and Florida rank 1st and 2nd respectively in steals per game. Coach Mike White discussed how important of a role turnovers will play in the game and the aggressive approach his team plans on taking.

With over half of the Gators’ regular season games this season already in the books, Kasey Hill is the leading candidate for most improved player. The 1oth ranked player of the 2013 class has taken nearly four years to finally break out and show why he was such a coveted high-school recruit. Hill has done a superb job filling up the box score this season, ranking 3rd in the conference in steals per game (1.9) and 5th in assists per game (4.9). For the first time in his career, he’s shooting over 41% from the field and has come away with at least 5 steals in two of his past four games.

The other upperclassmen who has truly taken off throughout the course of the season is Canyon Barry. The graduate transfer is now 2nd on the team in points scored, despite not starting one game this season, averaging 12.8 off of the bench. The Gators’ sixth-man has scored at least 13 points in six of his last seven games. He is also coming off of his best performance of the year, finishing with a season-high 27 points on 5-8 shooting from downtown. During Tuesday’s press conference Barry talked about the team effort in stopping Sindarius Thornwell and how to win the turnover battle. He also discussed his confidence as of late.

Florida-South Carolina tips off from Columbus at Colonial Life Arena at 6:30 p.m. Tune to SEC Network for television coverage. If you can’t watch the game, you can listen on the Gator IMG Sports Network.