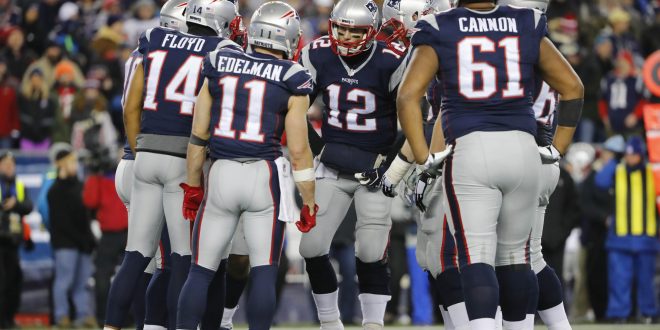 s quarterback Tom Brady (12) in the huddle against the Houston Texans during the fourth quarter in the AFC Divisional playoff game at Gillette Stadium. Mandatory Credit: Winslow Townson-USA TODAY Sports

For the eighth straight season coach Bill Belichick and his New England Patriots won the AFC East, earning the No. 1 seed in the AFC conference with a 14-2 record. Last week in the divisional round, the Patriots made a statement beating the Houston Texans 34-16 in Foxboro. This weekend in the AFC Championship game, the Patriots face the Pittsburgh Steelers.

Brady is the Key

Once again veteran quarterback  Tom Brady led the Patriots to the playoffs and is an MVP candidate. Despite being suspended for the first four games of the season, Brady still put in a stellar season statistically. Brady finished the regular season with a 112.2 quarterback rating, 3,554 yards passing, 28 Touchdowns and only two interceptions with a 67.4 percent passing percentage.

Tom Brady and offensive coordinator Josh McDaniels help orchestrate the offense but it helps to have one of the more crafty slot receivers in the game with Julian Edelman. He leads the Patriots in receiving with 98 catches 1,106 yards and three touchdowns receptions. In addition, the Patriots have an assortment of running backs. LeGarrette Blount leads the Patriots with 299 attempts 1,161 yards and 18 touchdowns. All-purpose running backs James White and Dion Lewis combined for 77 receptions, 1,094 yards, and five touchdowns receiving and rushing.

Defense Must Step Up

New England’s defense has been a key instrument in their success this season as well. The defense allowed an NFL-low 15.6 points per game. Veteran cornerbacks Logan Ryan and Malcolm Butler combined for six interceptions from opposing quarterbacks this season. The secondary will be busy  this weekend as they try to contain the Steelers star wide receiver Antonio Brown, as well as diverse running back Le’Veon Bell. All facets of the game offense, defense and special teams will be key assets in the New England’s battle against the Steelers.

The #Patriots and Steelers meet again.