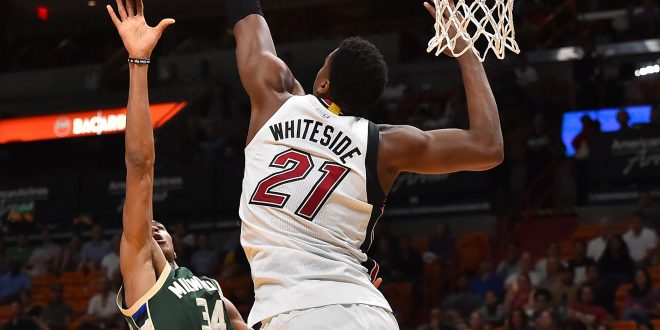 The two have faced off already once this season. Though the Heat kept it close the Warriors came out ahead with a 107-95 win. Converting shots from 3 point range seemed to be a big difference in the game. Miami attempted 30 from outside the arch, however, they only made 20 percent of their shots. Golden State on the other hand, attempted 27 but made 40 percent of their shots.

Heat center Hassan Whiteside and Warriors forward Kevin Durant were the leading scorers for their respective teams. Whiteside racked up 26 points and went 12 for 17 on his field goal attempts. Durant made 28 points and went 10 for 21 from the field.

Golden State’s sixth man, Andre Iguodala, will sit out tonight’s game in order to rest. Iguodala scored a total of 9 points against Miami the last time the two played. Due to shoulder problems, Heat shooting guard Tyler Johnson will not be playing in tonight’s game either.

Still no MRI for Tyler Johnson. But he will be examined by doctor tonight to determine next step.

If the Miami Heat, who are currently 14-30, hope to turn their season around, a win tonight is crucial. Whiteside will need to have another big game for the Heat. The Heat will also need a big performance from point guard Goran Dragic. Dragic has been averaging 21.9 points per game for the last 10 games.

It’s Golden State’s game to lose. Even with Iguodala sitting out, the Warriors are still heavily favored to win. The number one team in the Western Conference should pull out the win, and only a poor shooting night by their stars (and a hot one from Miami’s) would likely keep them from it.