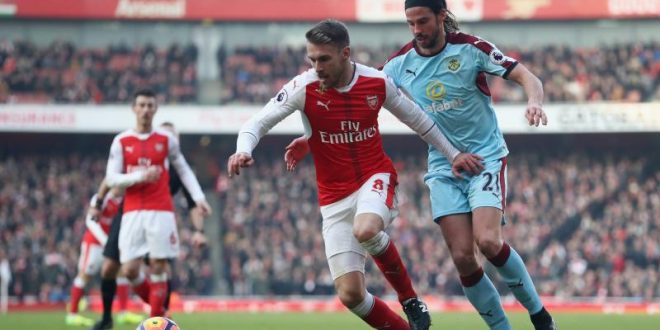 It was the game that saw the craziest ending this weekend, with all the action jam-packed into the second half.

Burnley played the stingy defense that visitors usually play at the Emirates Stadium, only conceding on set pieces despite Arsenal racking up 70% possession on 24 shots throughout the match, with eight of them on target.

The hosts were denied a penalty claim early in the second half as Shkodran Mustafi appeared to be tripped in the box after chasing a loose ball, but he put his team on top just minutes later.

Mesut Ozil whipped in a left-footed cross off a corner kick in the 59th minute towards the center of the box, and his fellow countryman Mustafi ducked down to flick the ball in the lower corner of the far post to give Arsenal the lead.

The Gunners suffered a setback just six minutes later, going down to 10 men when Granit Xhaxa received a straight red card after a reckless tackle on Burnley’s Steven Defour. Xhaka made a sloppy pass and after Defour intercepted it, Xhaka slid in with his cleat studs up. Defour was injured on the play, and Xhaka earned himself his ninth red card since 2014. Xhaka now also faces a four-match ban.

The visitors were finally able to capitalize on their one-man advantage in the early minutes of stoppage time. Francis Coquelin committed a cynical challenge on Ashley Barnes in the box, conceding a penalty opportunity to Burnley. Andre Gray stepped up and found the back of the net after his spot kick deflected in off of Petr Cech’s right hand. Arsene Wenger, the long-time Arsenal manager, was sent off moments later for arguing with the fourth official, and cameras caught Wenger shoving him in the tunnel. The FA has since charged Wenger with misconduct, and he is likely to face a multi-game suspension for his actions.

The drama was not to end at the 93rd minute, however.

Arsenal sent wave after wave of attacks in the last five minutes searching for the game-winner, despite playing a man down. They’re breakthrough came in the 98′ minute, in the final minute of stoppage time. Alexis Sanchez sent a right footed, curled cross towards the back post. Laurent Koscielny went to head down the ball, and received contact on his head from the foot of Burnley defender Ben Mee. Sanchez stepped up to take the penalty and sent a cheeky finish right down the middle, earning his team the win and the three points.

The goal puts Sanchez at the top of the BPL goal-scorers list. Diego Costa of Chelsea stands right alongside him, with both having 15 goals on the season so far. The win means that Arsenal are still keeping pace with Chelsea, eight points back of the league leaders.

In what will likely go down as the most shocking transfer of January’s window, Manchester …